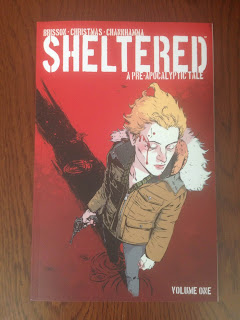 Sometimes I'm not sure why I keep trying to read graphic novels and comics when I find them so, so hard to get into. Part of the problem is how quick they are to read, which makes it hard for them to leave an impression the way a novel does.

I must say, though, that I really enjoyed this one a lot! Sheltered is a story about a group of doomsday preppers who descend into chaos before any doomsday event happens, because one guy thinks that the Yellowstone caldera is about to erupt. I don't want to give anything away, so that's about all I'll say about the plot.

It might just be because I met Christmas at Sask Expo and I found him really affable, but the art was my favourite part of this. The issue covers, including the cover of this volume, are so good. The style is also really dynamic, in a way that e.g. the art in Locke and Key isn't. One of the characters, Victoria, has hair that moves in a way that no woman's hair moves, that every man wishes women's hair moved, that I don't begrudge at all.

I'm looking forward to finding out what happens next.

- - -
After I read this, I took a break to run a few errands that I had. Unfortunately they were time-consuming and unproductive. My sister and I had some books to get rid of that I was going to drop off at a donation centre, but it closed about ten minutes before I arrived. Then I was going to buy some cat food from the vet, because Mr. Kitty has been ill recently and is eating some special food (Greebo, of course, is eating it too), but I arrived there about twenty minutes too late. So I went to the pet store and got some stuff that hopefully will still do the trick, then admired the cutest tabby cat I've ever seen and its grey brother, and their matching orange eyes. And then I went to get myself some food, and some toiletries, and remembered that I needed to book myself an eye appointment because I was watching Daredevil last night and the subtitles were blurry, and I don't want to hit a moose on the highway because I can't see it, so.
Posted by M.R. at 10/17/2015 05:06:00 PM