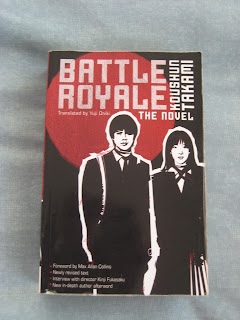 Review:
Like most people who are familiar with Battle Royale, I heard of the movie first. I finally got around to watching it about three or four years ago and enjoyed it quite a bit. It's easy to forget, though, that until last year, the movie had never actually been released in North America, and so a lot of people haven't heard of it at all. Anyway, I came across the book in a bookstore a couple of years ago and recommended it to my brother, and now here we are.

Battle Royale is the story of a middle school class of 42 (42!) students that becomes one of fifty classes chosen to participate in the so-called Republic of Greater East Asia's Program, a "battle simulation" where the students are given one random weapon each and forced to fight to the death. Each student has an electronic collar that can be remotely detonated if they try to escape or otherwise not comply with the rules. The students all deal with this situation in different ways. Some comply with gusto, while others try to band together and escape, and still others just commit suicide.

Although, shall we say, sizeable, this book zips by very fast. There are very few establishing details about what kind of place the Republic is (it's clear that it contains Japan, but not exactly what else), although some are filled in as the book proceeds. There are some memorable set pieces that seem to have been copied straight into the movie, and general brutality abounds. It's a fun read, although a little clunky in places where the translation fails to capture linguistic or cultural stuff. (Yuji Oniki does a good translation as far as I'm concerned. I've only read one other Japanese novel in translation, Haruki Murakami's Dance Dance Dance, and the translation of that one was better, but it's not as if this one is unreadable.)

Pretty much every single one of the 42 classmates is given an opportunity in the spotlight, and they mostly have distinctive personalities (while still basically conforming to types: otaku, slut, jock, ditz, clown, etc.) and some of these moments are very touching. The overall tone of the book tends to satire, though, poking fun at the concerns of middle-schoolers and probably also the Japanese, although I'm not going to pretend I know a whole lot about that.

Also, somewhat randomly, I'm pretty sure that bulletproof vests don't work the way that Takami thinks that they do.

If you've seen the movie, you'll probably be surprised by how faithful it is to certain parts of the book (the lighthouse scene survives mostly intact as far as I can remember), while diverging widely from others. It's definitely worth a read if you enjoyed the movie, or if you found The Hunger Games too bloodless.
Posted by M.R. at 8/15/2013 12:00:00 AM