R27. Out of Oz by Gregory Maguire

Year Published: 2011
Pages: 563
First Sentence: It would take Dorothy Gale and her relatives three days to reach the mountains by train from Kansas, the conductor told them. 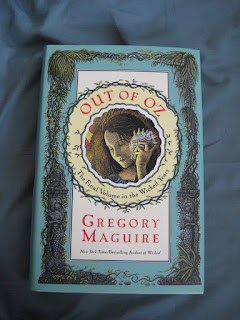 Review:
As I mentioned back at the end of May, I mysteriously managed to lose my review of A Lion Among Men. Summary of it: disappointing and far inferior to Wicked and Son of a Witch, the Lion is annoying and hard to relate to, the book is mostly just a lot of wheel spinning, and I really hoped Out of Oz would be better.

Well, first let's talk about the Wizard of Oz in general, because the more I think about it, the more I realize it's been part of my life forever.

L. Frank Baum's The Wonderful Wizard of Oz was published in 1900, and according to Wikipedia, it was followed by thirteen more books. I only read one of those books, Dorothy and the Wizard in Oz, which I actually don't remember at all. I was in my early teens by that time, and didn't realize that there was more than one Oz book.

My acquaintance with Oz actually began much, much earlier than that, though. When I was very young, my family lived across the street from another family with three daughters older than me, who often babysat my sister and me, and they inevitably brought the 1939 Wizard of Oz movie for us to watch, although I'm positive that we almost never made it through the whole thing before my parents got home.

Meanwhile, there was a cartoon that I distinctly remember watching, though not where or when, and Tin Man, the often ridiculous Sci Fi channel original movie, which I watched shortly after its original 2007 airing.

Hopefully no one will argue with me when I say that The Wizard of Oz is a giant of 20th century (North American) pop culture history, not just my vague childhood memories and university tv watching. I suspect a lot of people are like me, though, in being less familiar with the books than with their adaptations.

The novel, subtitled The Life and Times of the Wicked Witch of the West (so basically exactly what it says on the tin) was published in 1995, and then eight years later, it became a Broadway musical. (This in turn made its way to my attention in late 2005, because that's how long it takes information to migrate from New York to Saskatchewan.) I actually saw the show in London in 2009, with an Australian girl from my hostel whose name I've since forgotten, but who was good company. The theatre was done up in green everywhere. The music and staging were great.

But the story didn't make a lot of sense, even by musical theatre standards. So I came home, and luckily my sister is a compulsive book buyer, so she had a copy of Wicked which I read right away.

Wicked the book is, yes, thank God, much better than Wicked the musical.

And the short answer to my above question about Out of Oz versus A Lion Among Men for anyone who doesn't want to venture into the coming spoilers for the entire Wicked Years series: yes, thank God, it's a much better book.

Without dragging out the preamble any longer, Out of Oz is the story of the Wicked Witch of the West's granddaughter, named Rain. Basically the whole series is about upheaval in Oz in the wake of the Wizard's rule (which is depicted as very negative). War ends up breaking out between Munchkinland and "Loyal Oz," plus a lot of other complicated stuff. The Witch has a younger brother who sets himself up as the Emperor of Oz and a holy figure, and both sides are searching for a powerful magic book called the Grimmerie.

The entire series has underpinnings about identity, how people are defined by their actions and intentions, the ways they deal with their wounds, the perceptions of others, etc. There're also interesting (and fairly subtle) explorations of sexuality and gender that I can't say I've really encountered in fantasy before.

Out of Oz is really Rain's coming of age story, from neglected and abandoned broom girl to a teenager confronted with all the ramifications of her history. The book starts pretty slow but picks up steam at the end, which coincides with Rain's development into a more relatable character when she goes to boarding school and meets a boy named Tip.

Dorothy is on the periphery of the rest of the series but in this book she actually gets some dialogue, and also a weird running joke about her singing that I couldn't figure out.

This book apparently concludes the series, but I feel like there are as many or more loose ends left at the end of this book as there were at the end of Wicked, although I assume Maguire's pockets are significantly more full now than they were in 1995. Still, Son of a Witch is a pretty strong book and so is Out of Oz. A Lion Among Men is extremely flawed, but it does contain relevant details that wouldn't have fit into Out of Oz.

Overall, the Wicked Years series isn't perfect, but the first book at least is definitely worth a read. Maguire's writing fluctuates between serviceable, funny, and poignant. His Oz is a far cry from the magical place L. Frank Baum created, but he does a reasonably convincing job of making it function in realistic ways. Plotting and/or pacing could be tighter, but as it is you get to spend a lot of time with the characters.

Look to the western sky!

"No. I never say home." And Brrr realized it was true, and that Dorothy was right, too. We don't get an endless number of orbits away from the place where meaning first arises, that treasure-house of first experiences. What we learn, instead, is that our adventures secure us in our isolation. Experience revokes our license to return to simpler times. Sooner or later, there's no place remotely like home.

As soon as she could breathe, and before she could die.