I feel like I simultaneously accomplished a lot and absolutely nothing this month.

To begin, because I didn't think I'd manage it, I finally wrote a Socializing Engineers post for the first time in quite a while. Certainly not a masterpiece, but whatever.

Somehow I discovered that Joe Hill (@joe_hill) is Stephen King's son and not just a dude that William Gibson (@GreatDismal) retweets all the time. So then I was immediately a thousand times more interested in him, and bought the first volume of Locke and Key, read it, and liked it a lot.

I finally watched a bit of Louie, which so far has been mostly awesome thanks to the bits of stand up that are in it, but definitely isn't bad by any means. 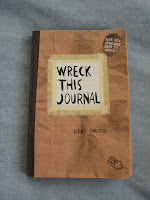 And oh hey, my good friend Anne got me a Wreck This Journal for my birthday last year, and I started finally working my way through it this month.

My main distraction for the month, though, was reading every single one of Jennifer Armintrout's chapter-by-chapter reviews of the Fifty Shades books. Every single one. I liked those enough that I may give one or two of her books a shot at some point down the road. 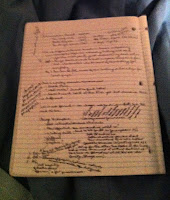 The next scheduled post is some bonus content, and then I should have another Top 100 post ready to go after that. Blah blah blah, I have a lot of Top 100 books to read to catch up with the amount of random reviews I have, but the round up of The Long Walk, Battle Royale, and The Hunger Games that I've alluded to a few times on Twitter is in progress for real and is turning into a long series of posts rather than just one. So at my current rate of posting that'll be showing up around June or something. Woo!
Posted by M.R. at 1/31/2013 12:00:00 AM