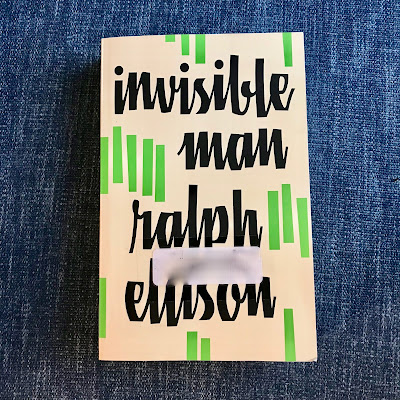 Review:
For some reason I always love it when a first person narrator remains nameless throughout a novel, and Ralph Ellison's Invisible Man remains nameless for almost 600 pages. These pages are filled with amazing incidents and the whole thing ends up pretty surreal.

The narrator is a young black man who describes himself as being invisible in the book's prologue. He is in a hole, literally. The reader will not discover what all this means until the end, because after the prologue, we revert to the young man's childhood. The first scene of the book is a completely flabbergasting incident in which the narrator goes to give a speech to his town's leading white citizenry, and instead ends up going through an ordeal of a "battle royal" in which he and several other black youths are blindfolded and put into a boxing ring to fight, then made to grasp for shiny coins on an electrified pad. Bruised and bloodied after this, the narrator still delivers his speech. (It's about humility.)

This whole thing earns him a scholarship to the state college for Negroes (this is the book's word and capitalization). We next catch up with him there, acting as chauffeur to one of the college's investors, a white man called Mr Norton. The two of them end up at a black sharecropper's cabin where they find the man, two heavily pregnant women, one older and one younger, and a whole bunch of small children. The man tells them about how he accidentally got his daughter, the younger woman, pregnant. Mr Norton swoons, and our narrator brings him to a nearby black bar, where, to make a long story short, all hell breaks loose.

This leads to the narrator's expulsion from college. The president sends him to New York with many letters of recommendation and says that maybe he'll be able to work his way back into the school. It's not until one of the addressees of the letters takes pity on the narrator that he learns he's been sabotaged by the college president. Each letter instructs the addressee not to give the narrator a job under any circumstances.

The whole book continues in this vein and frankly, while many of the separate incidents were shocking and impactful, the overall effect was pretty overwhelming and, dare I say, sometimes pretty tedious. It's interesting that Invisible Man and Native Son are side by side on The List, because it throws their different protagonists into sharp contrast. This narrator is almost nothing like Bigger Thomas other than the fact that they're both young black men, originally from the American South, who have immigrated to northern cities and are continuing to deal with the various forces of racism and oppression that exist within the worlds. Invisible Man has a problem though, and that's the fact that the surrealism of it keeps the reader very off-balance.

Or perhaps I shouldn't say "the reader," because I actually mean "me."

Obviously this is a work of fiction and therefore nothing in it is "real" when it comes to the events that occur. But with so much happening I wasn't sure what was meant to be heightened and what was mean to be an illustration of things as they are or were at the time when the novel was written. This is yet another case, though, of me feeling like I've failed a novel rather than it failing me. I'm just really not good at figuring out symbols. You'd think that, this far into the project, I'd have gotten better at this sort of thing, but I still have just as little patience for it as ever. Maybe even less?

Here's the thing, though: Richard Wright had rage on every page of Native Son and it made me want to read so much more of what he had to say, but all I picked up from Ellison in Invisible Man is a sense of bewilderment. He isn't bewildered, and it's not really up to me to say that he isn't just as enraged as Wright, it's just that Wright was better at conveying it, in prose, to me. Invisible Man of course, was written in a post-Native Son world, and it has a lot more to say about identity and race relations than the older novel. The narrator has no name for a reason, largely because he is constantly trying to figure out who he is, who he needs to be, who he wants to be, and how others see him.

Frankly I think I'd have liked this book better if it'd been 200 pages shorter.

I was puzzled. Just what did she mean? Was it that she understood that we resented having others think that we were all entertainers and natural singers? But now after the mutual laughter something disturbed me: Shouldn't there be some way for us to be asked to sing? Shouldn't the short man have the right to make a mistake without his motives being considered consciously or unconsciously malicious? After all, he was singing, or trying to. What if I asked him to sing? I watched the little woman, dressed in black like a missionary, winding her way through the crowd. What on earth was she doing here? What part did she play? Well, whatever she meant, she's nice and I like her.