First Sentence: They said I must die. 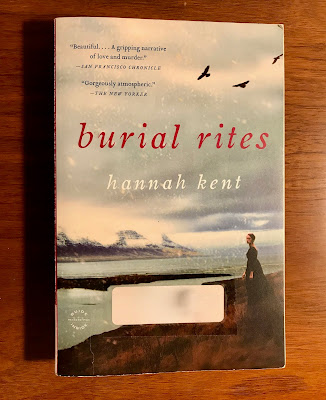 Review:
Hannah Kent's Burial Rites is one of those cases where a book and I just don't seem to connect.   I don't think there's anything wrong with this book per se, but it didn't make much of an impression on me.

The book is based on the true story of Agnes Magnúsdóttir, who was the last person executed for committing a crime in Iceland in January 1830.   (I looked this up, by the way. It seems that a few other Icelanders were executed after her, but they were sent to Denmark for the actual execution.)   The population of Iceland is about 350,000 at present, and was more like 50,000 at the time when the novel is set. Because of this, the country did not have the kind of infrastructure that one might expect to find a convicted criminal in, i.e. a single jail.

The book begins several months before the execution, after an undisclosed incident at the place where she was previously imprisoned, when Agnes is brought to stay with Jón and his family, wife Margrét and two daughters whose names you don't need to know because they will have almost no bearing on the story.   Agnes has already been convicted and sentenced at the beginning of the story. She and two others (a younger man and woman) have been found guilty of murdering Natan Ketilsson, farm owner, and some other guy whose name you also don't need to know because it's not important. While she stays with the new family, she's visited by Assistant Reverend Thorvardur Jónsson, aka Tóti, who is tasked with providing her spiritual advice before her execution.   As the book goes on, we learn Agnes's side of the story of how the murders occurred, and get a glimpse into what her state of mind might have been.

So, I was a bit dismissive of the characters above because the majority of the supporting characters barely matter in this story.   The book is obviously a character study of Agnes, and that's as it should be, except that we spend a lot of time with the other characters and nothing comes of that time.   One of Jón and Margrét's daughters is pretty and distrustful of Agnes and remains so to the end. Jón himself is basically just a ghost in the background of the whole thing, and I can't remember if he has more than one or two spoken lines in the whole book.   Truth be told, I didn't even find Agnes very interesting. She's a woman who's led a difficult life but her story plays out in a way that isn't exceptionally interesting or surprising. I was curious about how she ended up becoming a murderer (or if she was a murderer at all) but it's all a bit rote.

On the other hand, this is a novel that is grounded very firmly in a specific place.   The strength of the whole thing is the details of Icelandic life: whole families and their servants living most of their lives in a single room of their homes, dung used as fuel for fires, sheep butchering, and the chill in the air on the warmest summer days.   Occasionally Kent even throws in some volcano imagery, which was always unexpected and welcome. Iceland is the kind of place, similar to the Canadian prairies, where the landscape and the climate are constant presences that shape everything about the culture and experience of the people who live in them, even more so prior to miracles such as central heat and municipal water systems.

Given that the characters are the novel's weak point, and the setting is its strength, I have to say that the prose was somewhere between the two.   Kent tells her story in a mixture of third person limited (past tense) and first person (present tense), with the latter being narration specifically by Agnes.   In this case the present tense didn't bother me as much as it usually does, because Agnes is a woman who, first of all, will not make it to the end of the story, and secondly, is very much stuck in her present, given that all she can look forward to is her death.   This is true of all of us, of course, but is a matter of much more immediacy to her. The problem is that Agnes's narration is full of the kind of metaphors and similes that always eject me right out of a book. As the book went on these either dropped off or I just got used to them, but in the early going it drove me up the wall.   For example: "I wonder where they will store me, cellar me like butter, like smoked meat. Like a corpse, waiting for the ground to unfreeze before they can pocket me in the earth like a stone." This is four consecutive similes, and it's awkward.