Year Published: 1930
Pages: 392
First Sentence:
It was that emancipated race
That was chargin up the hill
Up to where them insurrectos
Was afightin to kill
Rating: 3/3 (read it!) 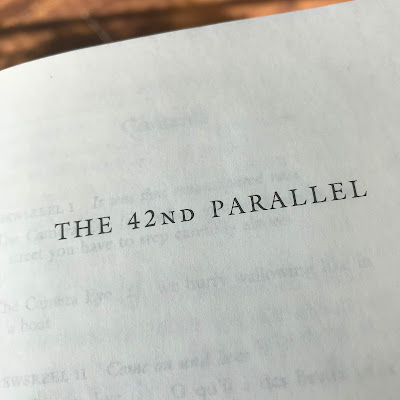 Review:
I really didn't know what to expect from The 42nd Parallel, the first book of John Dos Passos' U.S.A. trilogy. Knowing me, you'll know I'm already just a tiny bit irritated by that title, being a Canadian. There's a nice author introduction to the edition I have, which assembles all three books in one volume, and it got me on board. Here it is so you can get on board with me:

U. S. A. is the slice of a continent. U. S. A. is a group of holding companies, some aggregations of trade unions, a set of laws bound in calf, a radio network, a chain of moving picture theatres, a column of stockquotations rubbed out and written by a Western Union boy on a blackboard, a publiclibrary full of old newspapers and dogeared historybooks with protests scrawled on the margins in pencil. U. S. A. is the world's greatest rivervalley fringed with mountains and hills, U. S. A. is a set of bigmouthed officials with too many bank accounts. U. S. A. is a lot of men buried in their uniforms in Arlington Cemetery. U. S. A. is the letters at the end of an address when you are away from home. But mostly U. S. A. is the speech of the people.


Still, I was frustrated at the outset, thinking that I might be in for a retread of Studs Lonigan, when the first character I encountered was Irish-American working stiff "Mac," aka Fenian McCreary. Lucky for me, the scope of U.S.A. is much greater, as the name implies.

There's not exactly a plot. The book is about scope, in a way, capturing the early 20th century American experience from a variety of (albeit exclusively white) characters' perspectives. Dos Passos features five different characters: the aforementioned Mac, who lives on the bum for a while and eventually ends up in the labour movement; Janey Williams, who grows up in Washington, DC, and becomes an office worker; J. Ward Moorehouse, social climber from Delaware who sort of invents public relations; Eleanor Stoddard, an aspiring artist in Chicago, and Charley Anderson, a boy in North Dakota. As the book goes on, the characters' stories converge.

There are four different modes in the book, which for me at least was an excellent way of maintaining interest through a rambling narrative. The bulk of the book is the stories of the characters above, with slightly different styles for each. Next there are "Camera Eye" sections, featuring stream-of-consciousness writing from the author's life. I actually could've done without these because they're mostly nonsense. More appealing are the "Newsreel" sections, in which headlines, lead lines, and bits of song or poetry are all squashed together in a jumble. (The first sentence of the book comes from a "Newsreel.") And finally, there are brief profiles of famous people of the time, written as prose poems, which were maybe my favourite parts of the book.

I really liked all of the characters, including the ones I hated. I admire how sprawling this project is. At the end of the book, the Americans have just joined the rest of the world in the Great War. I do have a feeling that this will be more notable as part of the whole, so I'm interested to see what happens next.

Eleanor was always trying to get a word in alone with Eveline; and the fact that Maurice didn't like Eveline the way Eveline liked him made Eveline very unhappy, but Maurice and Eric seemed to be thoroughly happy. They slept in the same bed and were always together. Eleanor used to wonder about them sometimes but it was so nice to know boys who weren't horrid about women.