R76. The Years of Rice and Salt by Kim Stanley Robinson 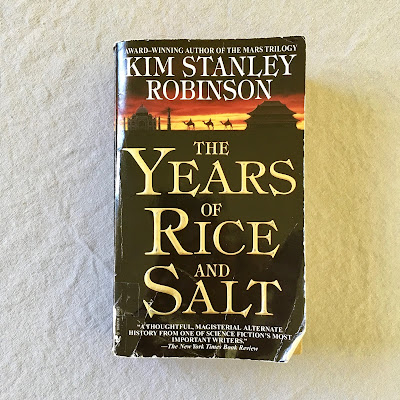 It's been quite a while since I last read a pure alternate history novel—I think the last one was The Difference Engine, back in 2011ish. The Years of Rice and Salt is a very different sort of thing.

This novel got on my radar several years ago, and it must've been purely because of the title, because it wasn't till recently that I discovered the premise and moved it way higher on my list.

Here's said premise: what if the Black Death killed even more of the European population than it actually did? What if Europeans had almost "gone extinct"? How would the world's other cultures have filled that void?

Well, Kim Stanley Robinson develops that idea in this book by dropping us into a selection of different eras of importance: the period immediately after the plague, and various other events hundreds of years apart, from the perspectives of scientists, soldiers, explorers, and the odd ordinary person. He achieves some character continuity by using the concept of reincarnation, giving his characters names that begin with Bs or Ks or Is to alert us to the fact that they're the same people in different incarnations.

Now, I found this book interesting, but I didn't love it as much as I'd hoped I would. The Muslims and the Chinese are the cultures most prominently featured, although we do delve into the Americas and India eventually. Africa is mostly ignored. No European/white/Christian character is ever featured as a point of view character, which I am certain was deliberate but left me curious nevertheless.

The biggest problem with this book is that it breaks the long book rule (i.e. 750 pages is too long). I found that certain sections really dragged, even with the character continuity that was supposed to keep me engaged. I feel like this may have been more effective as a series of short novels or maybe just a trilogy, rather than cramming everything into one very long novel. And before you say anything, yes, I realize that that would make it even longer.

This is my first time reading Robinson, who seems to be kind of a big deal when it comes to sf, and I will give more of his work a try. But as much as I wanted to love this novel, some of the things he did with it really didn't work for me. I found the sections in the bardo (where the characters go before being reincarnated) very tedious most of the time, and the resolution of the novel was too explicit when it came to elucidating its themes (which basically have to do with striving and living as best we can in a hostile world).

Anyway, I've struggled to even write this review to come up with what rubbed me the wrong way in this book. I don't know if I've managed to express it well at all. What it comes down to is that it's an awesome idea with a flawed execution. Alas!
Posted by M.R. at 12/16/2019 12:00:00 AM