First Sentence: He went up the mountain as God had commanded and it was there that the miracle happened. 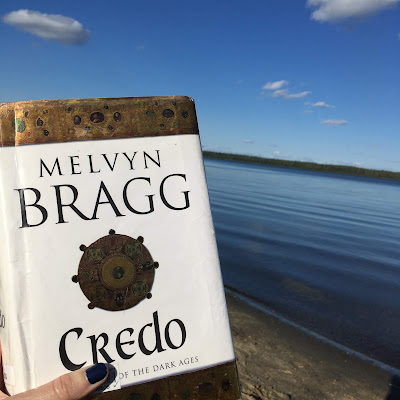 From just the synopsis, I was ready to categorize this as a romance novel. In 7th century Ireland, Bega (Bee-ga) is the daughter of King Cathal, and Padric is the visiting prince from Rheged, back in Britain. He has been in Cathal's household for several years, spending time with Bega, teaching her how to use a sword, and discussing the gospels. It takes Bega some time to realize it, but she and Padric are in love, which is a problem when Cathal decides to marry her off to Niall O'Neill, who is the literal worst. Many people end up dying, Bega is banished, Padric helps her to escape, and that's only the first part of this seven-part, seven hundred plus page long book.

It's what comes next that places this firmly in the historical fiction genre rather than romance. You see, after Bega and Padric escape, they don't stay together. Padric becomes a rebel leader of the British in opposition to... the Northumbrians? (My knowledge of the British Isles and their various Dark Ages invaders falters here.) Bega becomes a nun, and the book concentrates most on her and the evolution of the Christian Church in this period.

Of course you must know by now if you've read any of my other reviews about books that have religion and faith in them, I love this topic. So, while other readers may find all the God stuff tedious, I was completely on board. Full detail of arguments made at the Synod of Whitby? Yes, please. Bragg does such an excellent job of portraying the centrality of the Church in his characters' lives, their fanaticism, their totally foreign worldview. This past is a foreign country in the way that so many historical fiction novels are not. Take the comforting presence of severed heads displayed in Cathal's great hall as just one example.

That being said, Bragg occasionally gets carried away transmitting the historical research he did onto the pages of the novel. More than that, he occasionally gets carried away putting words into his characters' mouths. This is obviously his prerogative as the author, but for instance, a conversation between Christian zealot Bega and pagan priestess Reggiani feels a bit pat. The prose is workable but there are seams showing. Fortunately for me, I liked all of the other stuff enough that I was able to overlook the novel's real, noticeable problems. I wouldn't fault anyone for disagreeing, however.

Bragg does well with his characters, with the exception of the character named Chad. (I didn't realize that this was a name people had prior to the invention of the popped collar, either.) Bega is a religious fanatic who is easily swayed by authority figures. Padric is brilliant but a hothead who gradually subsumes all of his interests to his obsession with independence for the British people. Various other characters, such as the man who would become Saint Cuthbert, are drawn with a few broad but effective strokes. (Cuthbert specifically, with his unwashed body, emaciated from frequent fasting, and long, uncut fingernails, made my skin crawl whenever he appeared.) But I just couldn't figure out what Chad's deal was. He's introduced as a child basically being adopted by Bega and Padric when they arrive in Britain, and remains with Bega as a servant for many years. On occasion he's portrayed as quite dimwitted, and I wondered if Bragg intended the character to be disabled, but I wasn't able to figure that out at all.

On final thing I'll say is that the religion in this book, in particular the religious experiences and "miracles" of the characters are not at all contextualized. That's left up to the reader, which again, I didn't mind, but I can see how a different reader might. Even without context, this book makes abundantly clear what many would like to forget, which is that the early Christian Church (and uh, the modern Church too) was an apocalyptic death cult that pathologized natural human behaviour and glorified suffering and asceticism.