Year Published: 1932
Pages: 176
First Sentence: Studs Lonigan, on the verge of fifteen, and wearing his first suit of long trousers, stood in the bathroom with a Sweet Caporal pasted in his mug.
Rating: 3/3 (read it!) 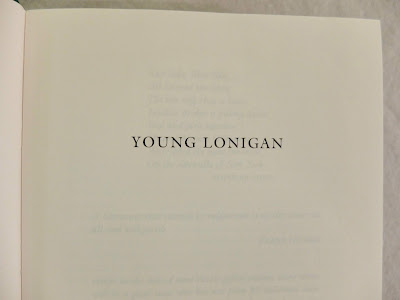 Review:
Young Lonigan is the first book in James T. Farrell's Studs Lonigan trilogy, which I had to get from my university library because even though it's within the Top 30 on The List, no one has ever heard of it, at least not around here.

The story is about Studs Lonigan (actual name: William), who in this book is a Catholic Irish-American boy in Chicago. He's almost 15 and only a little younger than the 20th century: the year is 1916, America has yet to enter the First World War. Studs has decent parents and a stable home life but those things don't prevent him from getting into trouble with and in opposition to the other boys in his neighbourhood.

At the very beginning of the book, he and his sister are graduating from elementary school. A gathering follows at the Lonigan house where the boys and girls play various bizarre old kissing games such as "Post Office," which is apparently a common reference that I have literally never noticed before in my life. The rest of the novel is mostly concerned with the events of the summer, prior to Studs starting high school (although by the end the new school year has started).

This is a tough novel to pin down. At times it's comic, like when Studs' mother is constantly telling him to pray to see if he has "the call" to be a priest. Studs clearly does not have the call. At other times, it's extremely uncomfortable. Young girls have a hard time in this world, which is putting it mildly. Lots of virgin/whore stuff and sexual harassment going on. Anyone who isn't Irish has a hard time, too. The adults around Studs are constantly opining to the effect of "there goes the neighbourhood" over the fact that Jews and immigrants from other countries are moving in to where they live and get their entertainment. To quote Old Man O'Brien, the father of one of Studs' friends:


"But I ain't so much interested in sports as I used to be. Baseball's the only clean game we got left. The Jews killed all the other games. The kikes dirty up everything."

I'll cut it off there because that's all we need of that, but the speech goes on. It's not much later in the novel that Studs is basically repeating that sentiment, trying to decide which beach he and his friend should go to that won't have any Jews or black people or Poles on it.

Above all, this is a character study of Studs. As such, many of the other characters are not well-developed, particularly the large mass of other boys hanging around: Johnny, Danny, Weary, Nate, Adam (or is it Andy?), and a whole list of them that I had trouble keeping track of. There are a couple of girls named Frances and a couple of girls named Helen. One of the Helens is a wonderful tomboy who I wanted to see more of.

The thing I enjoyed most about this book is that it feels like a picture of a time. The slang is occasionally bewildering but usually decipherable from context clues, making this a less extreme version of A Clockwork Orange, which I really liked. It can be a tough read because of its content, but it's a fascinating slice of life in a very specific community.

I'm very interested to see where this story goes next. At the end of the book, it feels like Studs could still go down any path. (Unfortunately the Wikipedia page about the book is a bit spoilery, so I have some idea which one he does go down.)

They had walked home lazy, and he had carried her books, and wished he had the price to buy her candy or a soda, even if it was Lent, and they had stood before the gray two-story building where she lived, and he had wanted, as the devil wants souls, to kiss her, and he hadn't wanted to leave her because when he did he knew the day would be blacker, and he would feel like he did when he had been just out of his diapers and he used to be afraid of the night. There had been something about that day. He had gone on in school, wishing and wishing for another one like it to come along. And now he felt it all over again, the goofy, dizzy, flowing feelings it had given him.
He puffed, and told himself:
Well, it's so long to the old dump tonight!