Let's take a quick minute to talk about my second-favourite book app (the first being Goodreads where lately I have been adding books to my to-read list at a frankly insane pace). But I digress.

My second-favourite is Litsy, which I guess I first mentioned back in March 2017. I'd probably been on it for almost a year by then, being recruited by an early marketing push on various entertainment sites. Described accurately as the marriage between Goodreads and Instagram, Litsy allows you to post photos of books along with reviews, quotes, or just random comments (called "blurbs"). 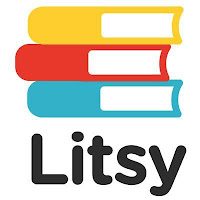 It used to be that Litsy was only available via app, but recently this was changed and they launched a web version of it. When this first happened, they encouraged existing users to promote the new web version, and here I am, a month late or so. The app has always been very sparsely used and quickly abandoned by new users (I have a ton of followers with no activity on their accounts) and although its simplicity is nice, the limited functionality can be a pain sometimes. I can only hope that the web version will draw more users in, because I live in constant apprehension that the app will be abandoned due to the lack of users.

But why Litsy instead of #bookstagram? Well, frankly because I do not have the patience to make a flat lay. From what I've seen of #bookstagram, things over there are just as focussed on aesthetics as on books, and although that's probably not the case for everyone, I'd certainly feel pressured to conform to that aesthetic. With Litsy, it's ok to not have a gorgeous photo to share, and in fact you don't need to share a photo at all. It's just a casual community of people who really love books.

You may want to give it a try.