35. As I Lay Dying by William Faulkner 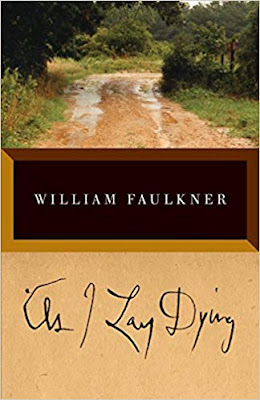 Back when I read and reviewed Light in August I mentioned how I'd been led to expect that William Faulkner would be impenetrable and difficult to read. I now suspect that reputation may largely arise from As I Lay Dying.

The book's premise is simple: Addie Bundren dies and her family transports her body to her hometown. The execution is anything but. The story is told by multiple characters, stream of consciousness, chiefly Addie's husband and children but also the odd neighbour or other onlooker and even at one point after she's been dead for a while, Addie herself. It is, I think, a dark comedy, given the incredibly gross and ridiculous process of the family carting a corpse all over the place. The two eldest Bundren children are Cash, the carpenter, and Darl, the crazy one. The three younger are Jewel, who is very angry and bought himself a horse, Dewey Dell, the lone girl, and Vardaman, who loves to fish. Their father, Anse, is a lazy man who relies on the generosity of his neighbours for basically everything. I had a poor handle on the characters' ages, because it seems like Vardaman is very young, whereas I believe there's some indication in the novel that Cash and Darl are in their late twenties. Also side note but I love the name "Darl."

This book kind of snuck up on me. I ordinarily don't have much time for stuff like this: difficult, experimental, confusing (I will confess right now that there were a few plot points that I had to go online to confirm I'd actually understood, the ending chief among them). I'm not sure when I really got on board, but it must've been the black comedy aspect that knocked it over from annoying literary fiction to enjoyably wild ride. Also the fact that this story could only really be told in this way.

This is the third of Faulkner's books that I've read, and it's the one I've liked best. Every character has a distinct voice, and he does so well presenting their preoccupations and their goals. I wish I had more to say about the book, but unfortunately I procrastinated a bit in writing this review and find myself at a bit of a loss. In any case, next up from Faulkner is The Sound and the Fury, which is in the top ten, and which I'm now very much looking forward to.

How often have I lain beneath rain on a strange roof, thinking of home.