37. The Bridge of San Luis Rey by Thornton Wilder

Year Published: 1927
Pages: 235
First Sentence: On Friday noon, July the twentieth, 1714, the finest bridge in all Peru broke and precipitated five travellers into the gulf below.
Rating: 3/3 (read it!) 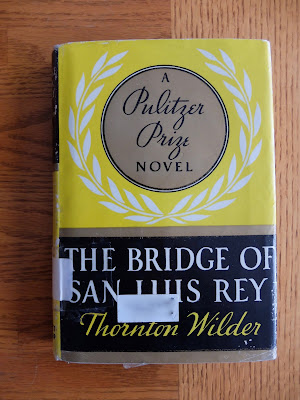 Review:
The Bridge of San Luis Rey begins with the unexpected destruction of the titular Inca rope bridge, and of five people along with it. They are:
The setting is 18th century Peru, a locale I don't know well but based on this book, it was still under Spanish control at that time. The characters are a mixture of Peruvians and Spaniards, and also they're all dead at the beginning of the novel, which means there's an oppressive sense of futility hanging over everything. The narrator is some present-day spectator, relating the story of Brother Juniper.

Brother Juniper witnesses the accident on the bridge, and rather than feeling relieved at having escaped this fate himself, he sets out to try to determine why these five specific people died in this fashion.

The Brother Juniper framing device is what gives this book its strength. I suppose a book could be written that just tells the story of the five individuals and the bridge collapse, but for a reader like me, who isn't very good at spotting symbols or themes, I need Brother Juniper as a guidepost. The question in this book isn't as simple as Why do bad things happen to good people? but rather a series of questions, some of which are more related to Brother Juniper's religious calling: why should God choose to take certain people in such a spectacular fashion, and does He even care? Eventually everyone who knew us will be gone, even those whose names and deaths are memorable enough to be recorded in history books. What does that mean for the quest to live a good life?

Anyway, Thornton Wilder doesn't seem especially interested in his historical setting, although there's just enough establishing detail that I could picture things somewhat clearly. But I didn't get the sense that Wilder spent a ton of time researching the period and social customs and dress and so on. He is concerned with his characters, though, and every single one in this book is well-developed and memorable. Even Jaime, who gets the least attention, has some really vivid characterization.

The prose style is solid. Wilder can get a lot across in a few words, for both descriptive passages and the more plotty ones. I found several of the observations astute if not quite worthy of being copied into this review (so I suppose not the kind of wit I appreciate most).

This book was a very quick read, and didn't make much of an impression till the very end, when things come together in a really interesting and moving fashion. Definitely worth a read.