First Sentence: As he appears in an early photograph, William Johnson is a handsome young man with a crooked smile and a naive grin. 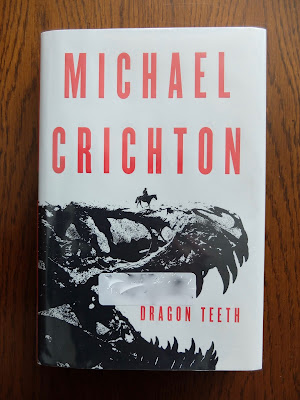 Review:
Dragon Teeth is Michael Crichton's stealth posthumous prequel to Jurassic Park, a book that I hope needs no introduction whatsoever at this time. I think the book is posthumous for a reason, but I did enjoy reading it, so there's that.

Now. I've read Jurassic Park and The Lost World, but did so way back in the mists of time. Here's what I remember about Jurassic Park:
Basically what has stuck with me after question mark years are the differences between the book and the movie. I don't remember what Crichton's prose was like in that book, or how exciting it may or may not have been.

Which is all sort of immaterial, because I'm here reviewing Dragon Teeth and not Jurassic Park.

Dragon Teeth is about a young man named William Johnson who, in 1876, ends up caught up in the Bone Wars between Othniel Charles Marsh and Edward Drinker Cope, two early real-world paleontologists and bitter rivals. Johnson's fictional, and just some guy. He travels west with Marsh's expedition, and then when Marsh abandons him, he joins Cope's expedition instead. After some, shall we say, setbacks due to the Indian Wars (concurrent to the Bone Wars, alas), Johnson ends up on his own with a whole bunch of dinosaur fossil bones in Deadwood, and has his own adventures returning to "civilization" in the eastern US.

So this was all well and good, but there were a few problems that prevented the book from being as much fun as it could've been. Mainly: Johnson is the least interesting person in this story, and his story doesn't involve any of the most interesting action. Of course there's a long tradition of boring point of view characters in fiction. The character we follow isn't that important as long as we're interested in the people they're with and the places they're in. But in this case, most of the book takes Johnson away from Marsh and Cope, who should be the real stars. It takes a hundred pages before we get any dinosaur bones, and then there's probably at least another hundred more with Johnson on his own and the bones in boxes.

The prose is decent. I haven't read enough Crichton to know anything about his style or whatnot, but one thing I did notice while reading Dragon Teeth was that some of the background info dumps (I don't like this descriptor, but it's all I can think of at the moment—what I'm referring to doesn't have a negative connotation) are written in a way that reads like pop non-fiction. I'm reading more and more of that these days, so I should know. I can't tell if this is a style choice or not, and it makes me nervous, because the style makes me feel like I need footnotes.

(I suppose I don't trust Crichton with this sort of thing because he was a climate change denier.)

In any case, the book was a super quick read and reasonably entertaining. I wouldn't start here with Crichton's work, though. If he'd really cared for this novel, he would've tried to publish it during his lifetime.
Posted by M.R. at 9/10/2018 12:00:00 AM