R60. The Hour of the Star by Clarice Lispector

First Sentence: All the world began with a yes. 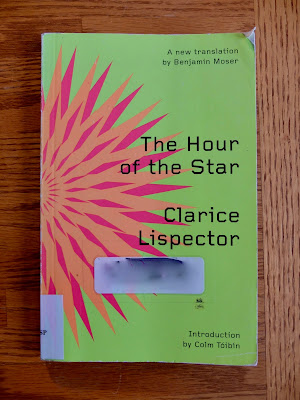 Review:
Confession time: this book looked interesting, but the real reason that I picked it up when I did was because it's so short. I hoped to gain some ground in The List by reading a very short book. Instead I ended up taking forever to read The Hour of the Star because I didn't have time to sit down and review it. So that backfired completely and I won't be attempting anything of the kind again.

The novel is narrated by the cryptic Rodrigo S.M., who is a writer and bears an unknown amount of resemblance to the actual writer, Clarice Lispector, a Brazilian woman. The setting is Rio de Janeiro, and the main character is a young woman named Macabéa, who works as a typist and lives in extreme poverty. She comes from "the northeast," which is something I understood mostly geographically, but the implication is that this is a country girl in the big city.

It's hard to say anything about the plot of this book because it's so short that to begin speaking about it is also to describe the entire story. It doesn't help that a large part of the early going is consumed by Rodrigo psyching himself up to write Macabéa's story, such that by the time he finally gets around to it there's not much time left. This is of course because the book is not only a character sketch but also a meditation on what a narrative is and the control of the narrator.

I read Benjamin Moser's note at the end of the book and found it a bit disconcerting. Moser says that Lispector's prose has a spiky quality, and I didn't find that at all, which either speaks poorly of his abilities as a translator or my abilities as a reader. But what I found was that this book felt most like a prose poem, each word carefully chosen for a specific purpose. That first sentence is one for the ages, and here's how the whole first paragraph goes:

This is prose with its own rhythm, that pulls the reader in and pushes them out with unmistakeable intent. It isn't an accident. The very next sentence?


Make no mistake, I only achieve simplicity with enormous effort.

I suppose that could be considered prickly.

I usually complain about flowery language and books that go nowhere, but fortunately for me it seems that when the book is a short one, I am 100% on board for both of those things. Lispector's portrayal of poverty in this book is more adept and affecting than any other book I can think of. Macabéa's world is very small but the edges of it are sharp. I suspect all this will stick with me for some time.

Who hasn't ever wondered: am I a monster or is this what it means to be a person?

I'm becoming terribly interested in facts: facts are hard rocks. You can't escape. Facts are words spoken by the world.

Email ThisBlogThis!Share to TwitterShare to FacebookShare to Pinterest
Labels: : Random, Author: Lispector (Clarice), Title: The Hour of the Star