Since I didn't get around to posting the photo of my stack of books yesterday, that's what today's post is devoted to. To be clear, I do not expect to read all of these books in twelve days, I'm just going to be selecting my reading from this stack. 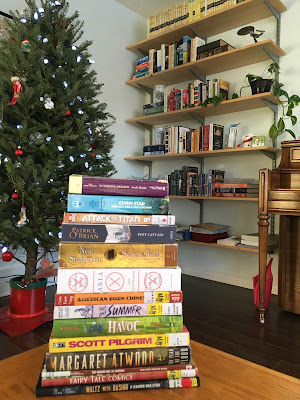 From the top of the stack and working my way down:


Wuthering Heights by Emily Brontë
I recently listened to the In Our Time podcast episode about this novel and it whetted my appetite to reread the thing finally.
Elven Star by Margaret Weis and Tracy Hickman
I read the first book in this series two Xmases ago and decided I should probably get around to reading the next one soon.
Attack on Titan Vol. 9 by Isayama Hajime
If you have been paying any attention at all you'll know I've been reading this series for a while in order to tide me over during the times when there are no new episodes of the anime. I actually have volumes 9-12 out from the library right now.
Post Captain by Patrick O'Brian
Another series I need to continue. I read Master and Commander back in 2014 and really wanted to read the next book in the series soon after, but of course it's now three years later.
System of the World by Neal Stephenson
Could it be another series? Yes. This is the third book in the almost incomprehensibly long and dense Baroque Cycle. It will probably take me over a month to read, but after investing so much time in the first two books, it's pretty much essential that I finish the trilogy.
The Southern Reach Trilogy by Jeff VanderMeer
I've already started this and it's what I'll be reading, novel-wise, for the next few days. When I read City of Saints and Madmen a few years ago I wasn't sure how much I liked it until I kept thinking about it months later. So we'll see how this trilogy goes. I've already finished the first book.
American Born Chinese by Gene Luen Yang
A graphic novel about growing up Chinese in America. Discovered this guy via his Boxers and Saints duology and wanted to see a bit more.
This One Summer by Mariko and Jillian Tamaki
I'm not sure if I'll get to this one because we are in an extreme cold snap and the idea of summer seems so foreign to me that I probably wouldn't be able to connect with this book very well.
Havoc by Chris Wooding
Another sequel (here's where I reveal the pattern: I don't feel any guilt about not reviewing sequels, so they're good Xmas reading candidates). This is also the closing half of a duology involving kids getting trapped in a comic book world by evil forces.
Scott Pilgrim and the Infinite Sadness by Bryan Lee O'Malley
The third book in the Scott Pilgrim series that I've been taking way too long to read.
The Year of the Flood by Margaret Atwood
The year that I finally read the sequel to Oryx and Crake?
Rat Queens, Vol. 3 by Kurtis J. Wiebe and several artists
This is Rat Queens' last chance, I'm afraid. Roc Upchurch's art in the first volume was a big part of what I liked about the book, and he is no longer the artist for what I consider good reasons. However, the second volume was disappointing. We'll see.
Fairy Tale Comics edited by Chris Duffy
Comics of fairy tales, what it says on the tin. Looking forward to this being a fairly light read. We'll see.
Waltz with Bashir by Ari Folman and David Polonsky
The opposite of the previous "light" read, this is a graphic novel about the 1982 invasion of Lebanon by Israeli forces. I just realized the graphic novel is actually an adaptation from a film, so we'll see how that goes.