First Sentence: That was when I saw the Pendulum. 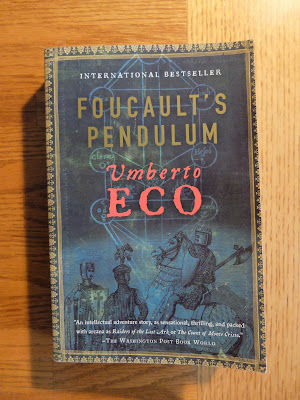 Foucault's Pendulum is going to be a tough one to review because I think a lot of it sailed right over my head. The thing is, whatever other sailing may have been happening, I sailed through this fairly dense novel over 600 pages long, which is very different from the experience I had with, e.g., The Naked and the Dead.

The book begins with Casaubon, the first person narrator, touring around a museum in Paris, looking for a place to hide in order to witness the gathering that he expects will take place there in the middle of the night. After that, it flashes forward a day or two after whatever it was that he was hoping/dreading to see has happened, and then he goes back to tell the story of how he got there. This is all doled out very slowly. While he was a graduate student in Milan, he was (a) writing about the Templars, and (b) getting to know an editor named Jacopo Belbo. Over the years the two of them are brought together a few times on matters related to the Templars, until eventually Casaubon joins Belbo and another editor named Diotallevi working for Garamond Press. Garamond is connected to a vanity press called Manutius.

Eventually the three men are tasked with publishing various nonsense books dealing with things like the Templars and the Rosicrucians and God knows what else through Manutius, and decide to write their own "PLAN" as a joke. The back cover copy gets into this, but in fact it takes forever to happen in the book. There is way more stuff that happens and some additional characters who enter the story, but it's ultimately just a very long exploration of how, if you toy with an idea long enough, you'll eventually give it credence.

This is an academic, skeptical version of The Da Vinci Code. Ultimately, though, it's too opaque to really appeal to a wide audience.

There are references to The Maltese Falcon's Sam Spade scattered throughout, and also, regrettably, to Finnegans Wake (also Cthulhu!). There are almost certainly a thousand other references that I simply didn't notice at all because I'm not at all familiar with these conspiracy theories or any of the vast wealth of knowledge that Umberto Eco obviously had access to in his mid-50s. This is kind of the exact same issue I had with The Name of the Rose, the other one of Eco's books that I've read. Eco is clearly a brilliant man but maybe a bit too brilliant, in that I could use just a tiny bit more hand holding through his books. The multilingual European sensibility of the thing is of course part of its appeal, but no matter how badly I wanted to learn as a teenager, I don't speak Latin, and translations would be nice. The book feels like an enormous amount of exposition, and it was seldom clear what was actual history and what was part of The Plan. (This too was part of the point, I'm sure!)

I'll also note that women get somewhat short shrift in this novel. The three female characters with much of a presence are Casaubon's girlfriend Amparo, a Brazilian woman; Lia, Casaubon's next girlfriend and the eventual mother of his child; and Lorenza Pellegrini, who is Belbo's love interest. Lia fares pretty well. She's smart and practical, and I liked all the instances where she showed up. She's presented as a contrast to all of the silly people (significantly, mostly men) who believe in all the conspiratorial nonsense. But that's sort of the issue: the women in the book aren't so much characters as they exist to make a point of some kind about some idea in the book. Amparo and Lorenza and Lia all have distinct personalities to some degree, but we get very little idea of their inner lives compared with Belbo, Casaubon, and even Diotallevi (who is forgotten most of the time, but that's because the whole thing is much more about Belbo than it is about literally anything else, including the conspiracies).

Overall I preferred The Name of the Rose to this, but that's mostly because I like historical fiction better than I like tenuously mysterious novels about conspiracy theories. (It's also because I love the movie, and the movie makes it a lot more approachable.) If you'd like to rush, baffled, through an enormous tome and be just as confused at the end as the beginning, give this one a try.

"[...] Will you be there?"
"Where else? I belong to a lost generation and am comfortable only in the company of others who are lost and lonely."

"We still haven't answered the real question," Belbo finally said. "Who were the Templars? At first you made them sound like sergeants in a John Ford movie, then like a bunch of bums, then like knights in an illuminated miniature, then like bankers of God carrying on their dirty deals, then like a routed army, then like devotees of a satanic sect, and finally like martyrs to free thought. What were they in the end?"
"Probably they were all those things. 'What was the Catholic Church?' a Martian historian in the year 3000 might ask. 'The people who got themselves thrown to the lions or the ones who killed heretics?' All of the above."

I could easily be somewhere else right now if I hadn't been in Belbo's office that day. I could be—who knows?—selling sesame seeds in Samarkand, or editing a series of books in Braille, or heading the First National Bank of Franz Josef Land. Counterfactuals are always true, because the premise is false. But I was there that day, so now I am where I am.