First Sentence: All children, except one, grow up. 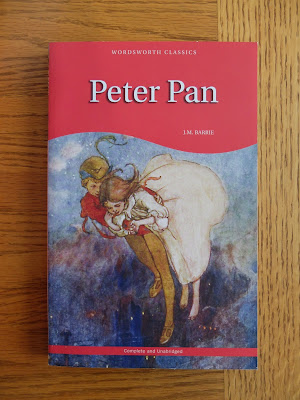 So here we are with my review of Peter Pan, particularly as compared and contrasted with last month's review of Tiger Lily.

I've said it before and I'll say it again: I love Peter Pan. Walt Disney's 1953 version was what introduced me to the character initially, and say what you will about racism (which we'll get to, I promise), that movie is great. I don't remember when I finally picked up the book for the first time, only that it immediately delighted me. Old-timey children's books have the most amazing narrative voice around, what with the clear presence of adult moralizing and the amazing darkness in them (I'm thinking here of everything from Alice in Wonderland and The Princess and the Goblin to The Little Mermaid and The Water Babies). People are dying all over the place and you can practically see the index finger shaking. I love it. Peter Pan is the same way. There's a glorious magical realism to it that really evokes children's make-believe.

In case you've been living under a rock, Peter Pan tells the story of Wendy, John, and Michael Darling's encounter with the boy who wouldn't grow up. He likes listening to stories at their nursery window, and convinces them to come to the Neverland with him so that Wendy can be mother to the Lost Boys. When they get to the Neverland, they have many adventures. That's basically it.

The book was initially called Peter and Wendy, and the two of them are the real heart of the story. Wendy is excellently portrayed as an eight-going-on-38 type of little girl, who loves to play at mothering the Lost Boys. I suspect that an argument could be made about Wendy being a stereotypical and gender normative character, and I'd probably agree with that argument, except for the real and affectionate way that she's portrayed here. She may be pretending to cook for the boys, mend their clothes, and feed them medicine, but this is clearly the game that she wants to play, and she's having a great time with it.

Peter Pan is harder to get a handle on, and is ultimately a rather disturbing figure. He's impish and playful to the extreme because he is a child entirely unfettered. He is missing the thing that gives children their humanity, all encapsulated in that first line: he will never grow up. Children are essentially aliens to adults, with questionable morals and appalling behaviour, but someday they will grow up. Barring tragedy of course, which is one interpretation I've seen of Peter Pan, i.e. he embodies the spirit of a child who has died. That's a little bit less sinister, and either way, the concept of Peter Pan is so striking that I find myself returning again and again, contemplating different things each time.

Which unfortunately brings me to the issue of racism. You don't need to turn very many pages in any children's novel over a hundred years old before you find something to object to, whether it be anti-Semitism, ableism, or, in this case, racism. Tiger Lily's tribe, called the Piccaninny tribe (a strange and unfortunate and inexplicable choice of name), are portrayed as ignorant, dimwitted, but adept at moving through the forest silently. Or whatever. There's no excuse to be made for this, although the reason for their presence in the book is clear. The real-life indigenous people of North America were imaginary to British children in the very early part of the last century. This is baffling to me, having been born and raised in Canada in places where one might see indigenous people every day. The racism, unfortunately, is less baffling. There's an interesting conversation to be had about whether and how to update children's classics, but not right now.

Rather more concerning is the matter of J. M. Barrie being, to put it mildly, a creeper. I've actually tried to avoid learning about this because of a) my love for this piece of literature and the character, and b) potential horribleness. From what I do know, no one who had actual contact with the Llewelyn Davies boys has come out and said that J. M. Barrie was a pedophile who abused them, the Llewelyn Davies boys being the children that inspired many of the characters in Peter Pan. However, it seems that some dubious shit happened there, and Barrie's relationship with those boys wasn't entirely healthy, to put it mildly.

So given any moral qualms about this book, which are creeping ever closer to my own experience when I read it, I'd like to recommend A High Wind in Jamaica. The last time I read Peter Pan was, I'm sure, before I started this project, and the similarity between the two struck me immediately during this rereading (as it turns out, it also struck me way back when I originally read Richard Hughes' novel in 2013, something I'd forgotten until I reread my review). A High Wind in Jamaica has a similar mix of horror and delight, with English children and pirates, and as far as I know there are no bizarre and upsetting allegations about the author.

On these magic shores children at play are for ever beaching their coracles. We too have been there; we can still hear the sound of the surf, though we shall land no more.

'You see, Wendy, when the first baby laughed for the first time, its laugh broke into a thousand pieces, and they all went skipping about, and that was the beginning of fairies.'

Peter was not quite like other boys; but he was afraid at last. A tremor ran through him, like a shudder passing over the sea; but on the sea one shudder follows another till there are hundreds of them, and Peter felt just the one. Next moment he was standing erect on the rock again, with that smile on his face and a drum beating within him. It was saying, 'To die will be an awfully big adventure.'