Canada doesn't do a great job with history education, or at least that was my experience going through primary and secondary school in the 90s and early 00s. I do remember learning things about geography and natural resources, "pioneers" and First Nations people prior to European contact. We took field trips to various local historical sites and museums. But there are some gaping holes, hence this reading project.

I don't envy people who are responsible for developing curricula, because there's so much to cram into a child's basic education. 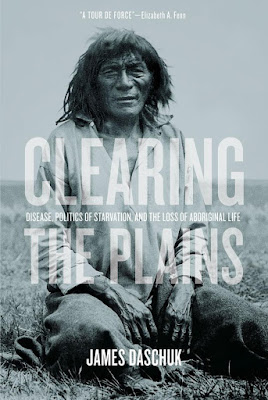 All this to say that even right up to the point where I finally read Clearing the Plains, I had some serious misconceptions about how the western Canadian plains were settled by Europeans. In fact, I'd barely thought about it. I knew that there was a fur trade, and that there were treaties signed, and that eventually the indigenous people on the plains ended up living on reserves while the Canadian government tricked a bunch of unsuspecting white Europeans into emigrating and attempting to farm in an environment that can politely be called hostile to the existence of humanity. There are large leaps between each of those things, however.

James Daschuk's book fills in some important blanks, and it's a book that I wish I could make every Canadian read.

Subtitled Disease, Politics of Starvation, and the Loss of Aboriginal Life, this book is about the processes that cleared the original indigenous population off of western Canada's plains. We will never know the size of the population in North America prior to the arrival of Europeans, but it's certain that that population was brought practically to the brink of extinction by accidents, indifference, and occasionally intent.

I say "processes" instead of "process" because there were several things at work. First of all, it seems that climate was a factor just prior to the presence of Europeans in the region. The indigenous groups were under pressure due to various droughts and of course the baseline "hostility to human existence" factor that I mentioned above. Climate would again play a role during the Year Without a Summer.

Worse than climate, though, was small pox. There was no need for apocryphal "small pox blankets," the indigenous population was simply so susceptible to small pox that it ran through their communities like wild fire. Due to the existing indigenous trade networks, communities were exposed to small pox before they'd ever met the Europeans who brought the disease across the ocean with them. This was essentially an unavoidable tragedy. Europeans had no way of knowing that it would occur, and if somehow the contact between the Old and New World had otherwise gone perfectly, small pox would have spread in a deadly fashion. Daschuk compares this encounter to what might happen if we were to encounter life forms from another planet. No one comes out of the small pox epidemic looking very good, however shout out to the Hudson's Bay Company for actually immunizing people at times.

Things get more sinister following the collapse of the buffalo population and signing of the treaties. (Daschuk's focus on disease and famine is laser-like, so he doesn't get into the hows and whys of the disappearance of the buffalo, or other things like residential schools, only how these things ended up affecting health and food supplies. Although I'm glad that he stuck so closely to his topic, some additional information about these things would've been nice on occasion for added context.) Basically, the chiefs signed treaties as a way to protect their people because they could see that their way of life was about to come to an end with the end of the buffalo hunt. What happened next was that the Canadian government took advantage of vulnerable people, essentially manipulating them with famine and disease.

John A. MacDonald (the "A" is for "Asshole") was Prime Minister of Canada for nineteen years and while he may be an important historical figure he also has rivers of blood on his hands. He and Edgar Dewdney (and others of course) used starvation as a tool of subjugation to drive the plains people onto reserves, where they were fed barely enough to survive. Remember, these were people who formerly thrived on the plains thanks to the buffalo hunt, which was no longer possible. Theoretically they were supposed to be taught how to farm, but this was mishandled to an almost laughable degree. The Indian agents were corrupt to the point that women would prostitute themselves in order to feed their families.

Hungry people living in poor conditions ended up suffering seriously from tuberculosis, a disease that was present in North America prior to European contact but that the extremely healthy population had rarely contracted. In the end, people rebelled and were executed, or gave up their status. This renunciation of status meant less people for the Canadian government to take care of by "honouring" the treaties, and also means that we will probably never know how many people died as a result of heartless government policy. The extreme reduction in the indigenous population of the plains meant that there was lots of room for European immigrants who did not care at all about the issues of the plains people (e.g. my ancestors), and thus they were pushed into the background.

This is an enormous black mark on Canadian history that few people are even aware of. I've been trying to educate myself more about indigenous issues and this was a huge blind spot even for me. I have a feeling most other Canadians don't know anything about the immediate aftermath of the treaty signings either. Of the three books I've read for Canada150 so far, this is the most essential. Pick it up as soon as you can.