This month has been one of the more cheerful ones in recent memory. I've had a lot to do and also more optimism than I've had in previous months. Thus I also have more energy to write about what I've been up to.

Attack on Titan
The second season finally began on the first day of April and I didn't immediately watch it because my brother and I agreed to do so together. I'm still not quite caught up to the most recent episode, but I am loving how gross this new season is. I think I've reached a part of the manga where things diverge significantly from the direction the show took (I can't remember exactly), so I'm excited about that, too.

The Awakening
An ok but not great horror movie set in a boys' boarding school. Weird twist late in the movie that I wasn't an exceptionally big fan of.

F8
Obviously this was amazing.

Wings
A First World War epic filmed in 1927 which has tons of amazing biplane action of a kind that I wasn't prepared for. It's comic at times and tragic at times and also propagandistic and perhaps a little too on the nose. I loved it.

Malice
My sister has been pestering me forever to read this so I finally picked it up to read in between chapters of East of Eden, which I love but can't read major chunks of all at once.

Growing
Last year I tried to grow some things in my yard and failed miserably. This year, I started seeds in the house and they're growing and it feels very magical. I also have several new houseplants that I'm crazy about. My grandma gave me an oxalis that I seem to have already killed or shocked into dormancy.

Missing
My cats have officially moved across the country without me. I miss them, but not their fur and general destruction of things. Ok fine, I just miss them. 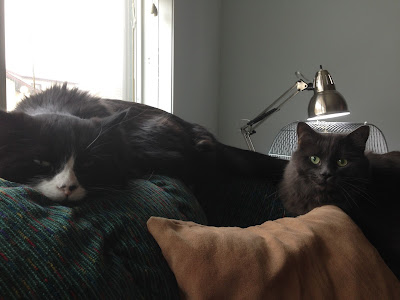 Cleaning
Since I no longer have cats in my house, I am also cleaning my house from top to bottom, which is a thing that I plan to do every spring and has worked out for me at least once in the past. I'm hoping that by the time I'm ready to plant things outside, I'll be done cleaning up inside. Cross your fingers for me.
Posted by M.R. at 4/30/2017 12:00:00 AM