First Sentence: "Who's done what now?" 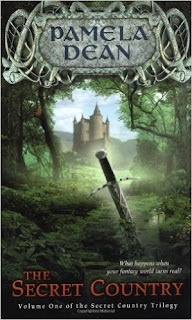 In my quest to read more books by women, I'm trying to explore more work by women writers whose books I've enjoyed in the past. The idea of reading by author rather than by subject is one that occurred to me embarrassingly late in life, with the exception Lucy Maud Montgomery. Anyway, I read Pamela Dean's Tam Lin quite some time ago, and really like it (one of the characters sets "The Love Song of J. Alfred Prufrock" to music in that book, and I've longed to have that music in my life ever since.

The Secret Country is rather different from Tam Lin, in that it's a portal fantasy rather than a fairytale adaptation. I'm not the type of person who finds it easy to pick out the faults of first novels, but it's very clear that The Secret Country is one of Dean's early works. The story is about five cousins who usually spend their summers together, playing through stories in a fantasy world they've invented together called the Secret Country (Ted and Laura are brother and sister; Ruth, Patrick, and Ellen are the other set of siblings). When Ruth, Patrick, and Ellen move to Australia one year, Ted and Laura end up staying with different relatives for the summer. In their explorations of their new locales, all five cousins find their way to a much more real Secret Country, with the help of some magic swords.

However, not everything is exactly as they imagined it: characters look different, or never appeared in their story in the first place; the cousins don't necessarily have the same abilities as their Secret counterparts. They also can't agree on whether they're experiencing some kind of group hallucination or if they're actually in the Secret Country.

I'm of two minds on this book. On the one hand, it's a good execution of the idea of a childrens' game come to life. The very best parts are when one of the cousins says, "Let's say..." which is a phrase that brought me straight back to my own childhood games of make believe. All of the cousins know the story, but it remains vague to the reader. A lot of the narrative is through dialogue, and the world-building and description are minimal, which somewhat fits with the premise as well.

On the other hand, I felt confused fairly often over the course of my reading. While I appreciate the way that the narrative is structure, it's a bit of a problem, too. I need my hand held a bit more tightly than this, it seems. Part of the reason why I abandoned Roger Zelazny's Amber Chronicles is that there just wasn't enough detail to pull me in.

Being that it's a first novel, though, and that there's absolutely no resolution at the end of it, I'm probably going to try out the sequel, The Hidden Land eventually. It's not high on my priority list, though.

"—and it makes you see whatever you're most afraid of."
"I wasn't afraid of it until I did see it," said Laura; "what I'm most afraid of is telephones." Perhaps she had seen what Princess Laura was most afraid of. Laura had been afraid of it herself, but she preferred that sort of fear, marrow-chilling though it had been, to the stomach-sinking dread of picking up the telephone and calling to find out when the library closed, or whether Roxanne thought it was her mother's turn to take everybody to the Girl Scout meeting.