First Sentence: Above the town, on the hill brow, the stone angel used to stand. 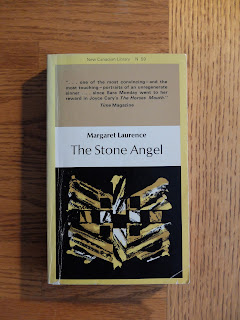 I inherited The Stone Angel in the same batch of CanLit and other stuff as The Tin Flute.  I'm sure I'd heard of it before, but I didn't realize that the book has appeared on high school English reading lists until just before I finally read it.  What a huge mistake, which I'll get into more in a moment.

This is the story of Hagar Shipley, born in the fictional town of Manawaka, Manitoba.  At the beginning of the book, she's an old woman living on the west coast (presumably in Vancouver, British Columbia), with her oldest son Marvin and daughter-in-law Doris.  The book is just her reflection on some of the key moments of her life, as well as her struggles to hang on to her dignity as an elderly woman with dementia.  She marries a man her father doesn't want her to marry, neglects her son Marvin, and favours her son John.  She ends up leaving her husband and working as a housekeeper.  Nothing much happens of a particularly earth shattering nature.  Still, because of the fact that Hagar is losing her grip on herself in the novel's present, she makes a fascinating unreliable narrator.  She's a proud woman who has always been very concerned about appearances, and she's also mean and a hypocrite.  She's a really great character.  Unfortunately, she tends to overshadow the characters who surround her, who are well-sketched but hard to get a good handle on.

This isn't my first kick at the Margaret Laurence can.  I also inherited her book The Diviners and read it before I ever started this project.  I liked both of these books fine.  They're critical of gender roles and racial politics on the Canadian Prairies and are decently paced, although by no means a laugh riot.  In fact, if CanLit can be believed, no human has ever been happy in Canada.  I wonder how many other countries have a national literature as dour as mine, and I'm adding a wider survey of CanLit to my ever-growing list of things to explore as a reader.  Interestingly, I found this novel fairly short on its descriptions of scenery, the town, and so on, which is rare for a novel in a "genre" that is typically so concerned with PLACE.

And that's also the main reason why I don't think that this is a good choice for high school students.  The Stone Angel is rich with meaning, reflection on aging and death, repentance, and so on.  I'm not old by any means, but I'm old enough that I can at least grasp the concept that one day I will be old.  I don't think most teenagers are capable of understanding that as something real that will happen to them.  When I was in my teens, years in the future were so abstract.  I could think to myself that I would be X years old in 20YY and I'd like to have four kids by then and be a published writer or whatever, but that person I pictured wasn't me, it was some other person with my name.  Now, when I think of being A years old in 20BB, I am thinking of the work I'll have to do to get there, wondering about my health, which cataclysmic events may occur in the interval, and understanding that my body will keep changing in ways that resemble decay rather than the growth I experienced in my teen years.  Ideally, this book would help teens to grasp the concept that they too might be old someday, but for the vast majority of them reading this book, it would just be a boring story about a bitchy old lady.  And it's so much more than that.

P.S. I've been trying hard to remember what novels I read in high school English and failing miserably to recall anything outside of "independent" reading studies (when I read Morley Callaghan's Such Is My Beloved, another dirgey CanLit novel, and Ragtime), but I'm sure there must've been something.  Anyway, I just want to say that I have no idea who develops the curriculum for this sort of thing, but including The Stone Angel is something I'd urge them to reconsider.

I try, a little, to pray, as one's meant to do at evening, thinking perhaps the knack of it will come to me here. But it works no better than it ever did. I can't change what's happened to me in my life, or make what's not occurred take place. But I can't say I like it, or accept it, or believe it's for the best. I don't and never shall, not even if I'm damned for it. So I merely sit on the bed and look out the window until the dark comes and the trees have gone and the sea itself has been swallowed by the night.