Way back in my original review of Jane Eyre, I mentioned that I first read it when I was ten years old.

I knew that back then, after that first reading, I used the book for a book report. I'd thought that that book report was long gone, but thanks to my packrat tendencies and the fact that I'm currently trying to deal with the enormous volume of useless paper that I've accumulated over the years, I actually found it again. I have it here to present to you today. I wish I knew what my teacher at the time made of this. 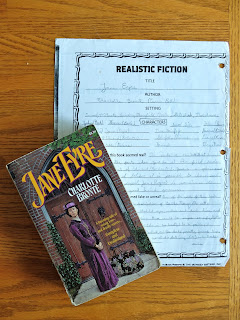 What parts of this book seemed real?
The parts of the book that seemed real were the parts when Jane is at Thornfield under the employment of Edward (Rochester). Jane is a governess to Adèle (Varens). I believe it is possible to have such affection for a pupil. Jane (Eyre) is sometimes stern yet she is a good kind governess.

What parts of this book seemed fake or unreal?
One of the parts of this book that seemed fake was the description of Bertha Mason; the author describes her and gives her bloodshot eyes, swelled and dark lips, and purple coloured skin. I don't believe there could be anyone so ugly. Another is the description of Rosamond Oliver; she is too beautiful to be possible; she has picture eyes, long eyelashes, a smooth forehead, oval-like cheeks, sweetly formed lips, a small chin, teeth (very white), and blonde curls.


I'll read this book several more times and get something new from it every time, I'm sure, but it's pretty hilarious to see what made the biggest impression on me as a preteen. Certainly not the love story. I also love that I used two semi-colons.

And here's a character profile of Jane from the same book report:

Describe the character in the book. Tell what you think the character looked like.
She has hazel-coloured hair and green eyes. She was quite short because she is said to be small throughout most of the book.

What kind of personality did this character have?
At the beginning of the book Jane is place-less, is unloved, and dependent. Towards the end she changes and becomes independent also a loved and loving woman. Jane is quite confident in herself and she shows this first when she is 10 and argues with Mrs. Reed (child to adult) and second when she argues with St. John and Mr. Rochester.

What did the character do that you admire?
She left Mr. Rochester after she found out that he had an insane wife. Jane sets out on foot without money or food for four days.