First Sentence: My name is Ruth. 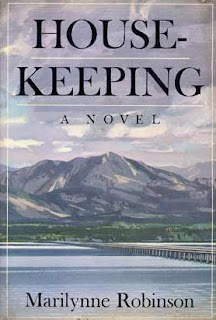 Review:
Marilynne Robinson's Housekeeping is a truly rare type of book that I can happily acknowledge as being beautiful and meaningful and absolutely not for me, without feeling bitter about it. I think that had a lot to do with the book's length or lack thereof, but let's not get ahead of ourselves.

Housekeeping is about a young woman named Ruth. She begins her story by explaining how her grandfather (most likely) perished in a train accident, and then reveals how she came to live with her sister and a succession of women in the house he built. Their mother drops them off on the front porch and kills herself, then their grandmother dies, their great-aunts give up, and their aunt Sylvie arrives to finish things off, which sounds ominous and is. These women are successively less fit to take care of Ruth and her younger sister Lucille. It's partly a story about the differences between sisters, but also just about the spaces between people and how they deal with those spaces.

At this point in my reviewing career, I think it's obvious that I favour straightforward language above all things. Robinson's writing is poetic in the extreme, but her execution of this is so good that I didn't roll my eyes at a single forced metaphor because there weren't any forced metaphors. She also brings the environment around Ruth's house to life so effectively that I could practically feel the cold and smell the water of the lake. I'd read a travelogue by this woman for sure, and I'd probably even read another one of her novels, just to experience her dexterity with words again.

On the other hand, the amount of dysfunction on display in the family that the book is about was deeply frustrating due to being unexplored, and I didn't find the book especially touching or affecting outside of a few passages. Lucille with her anger and her action is the most relatable character, although I'll admit Sylvie is portrayed believably, too. But I don't feel as if I ever had a handle on Ruth as a character beyond a pair of eyes watching the action, and that's a major problem with a first person narrator. There's probably some information to be teased out about how the life she's lived has made her that way, but with so little going on in the narrative, and so little to interest me in Ruth, I didn't really feel like thinking very carefully about it.

As always, if you want a book about sisters, We Have Always Lived in the Castle is the beginning, middle, and end of my recommendations. Honourable mentions to The Old Wives' Tale and Little Women.

Having a sister or a friend is like sitting at night in a lighted house. Those outside can watch you if they want, but you need not see them. You simply say, "Here are the perimeters of our attention. If you prowl around under the windows till the crickets go silent, we will pull the shades. If you wish us to suffer your envious curiosity, you must permit us not to notice it." Anyone with one solid human bond is that smug, and it is the smugness as much as the comfort and safety that lonely people covet and admire.