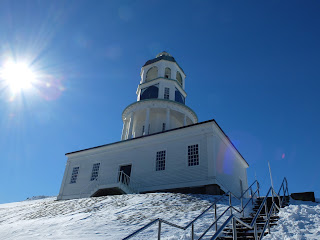 By far the most exciting thing that I'm willing to post about at the moment is that I went to Halifax, Nova Scotia this month with my sister. We had a fun time even though there were some cold days and that kind of weather can make it hard to feel really energetic all day. It was my first time ever on the east coast, and now I've been to a grand total of six of the provinces (excluding airports). Hurray! We also visited Peggy's Cove, where neither of us was swept into the ocean, and Lunenberg, which was just super pretty. 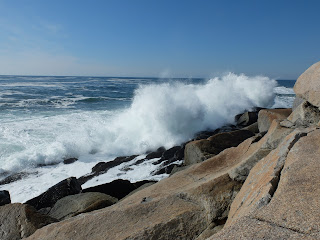 I made it through most of four books during my travels: Jamaica Inn by Daphne du Maurier, Indian Ernie by Ernie Louttit, Franny and Zooey by J. D. Salinger (and there's a chance I felt the same about this book as many other people felt about The Catcher in the Rye, because let me tell you, I wanted to strangle every single one of the characters), and The Red: First Light by Linda Nagata. I'm still working on this book but will finish it within the next week if all goes well, and then it's all Parade's End all the time.

After hearing tons about it for a long time, I started watching Friday Night Lights THE SHOW and was hooked immediately. While I must say that I hope Taylor Kitsch becomes a better actor at some point, I also am obsessed with Kyle Chandler's eyes to an absurd degree, so I suppose that all evens out?
Posted by M.R. at 2/29/2016 12:00:00 AM