Unlike last year, when I didn't post a picture of my book stack until.. this year (i.e. here's the post that I updated before writing this one), I'm slightly more organized. Instead of focussing on gaining ground on my 2015 reading goal, I just got a great big stack of library books for this year's holiday reading. Some of them will at least help with my year of reading women. I doubt that I'll get around to reading all of these over the course of my readathon, but I should at least get a good start. 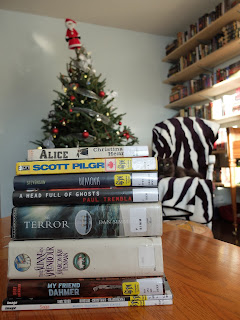 This is an Alice in Wonderland variant thingy that I'm pretty keen about. Basically Alice is an escapee from an insane asylum but there may be some sort of real monster that escaped with her. I think. I don't read cover copy anymore because it tends to give away too much, when it's not getting details wrong.

Scott Pilgrim vs. the World by Bryan Lee O'Malley

I read the first of this series what feels like forever ago, and decided that I should really just get around to reading the next one. They're quick to read, after all. Scott Pilgrim presumably continues to fight Ramona Flowers' exes.

I'm not sure how I managed to never see this when it was a webcomic, but I didn't hear about it until it was already over.  Fortunately for me, it became a comic I could get in book form from the library! I think it's about a mad scientist and also there's a cat in it?


A Head Full of Ghosts by Paul Tremblay

I discovered this book via a Halloween season review on a movie website. Christmas is almost a better time for horror than Halloween is, though, and I'm really eager to pick this up. I have literally no memory of what it's about.


The Terror by Dan Simmons

I've already started reading this one, actually, so I have a few more details about it than the other books. Frozen in Time blew my mind last year, and this book is a fictionalization of the Franklin expedition, plus apparently a monster. So far, I find every mention of tinned food to be far more terrifying than the monster-related stuff, but we'll see. I have a long way to go.

The Sunne in Splendour by Sharon Kay Penman

A 900+ page doorstop about Richard III. I've been sort of dying to read this for a while, and decided to finally carve out the time this year.

My Friend Dahmer by Derf Backderf

Turning toward the macabre, this is a graphic novel by a guy who knew Jeffrey Dahmer as a teenager.  I leafed through a few pages after I picked it up from the library, and it looks like it'll be fascinating and disturbing.

The sequel to a comic I read during the October readathon this year. Presumably things go from bad to worse for the doomsday preppers who ushered forth their doom a little early in the previous volume.

I know nothing about this other than that a lot of people seem to really love it. I seem to think it involves star-crossed lovers.