First Sentence: Now consider the tortoise and the eagle. 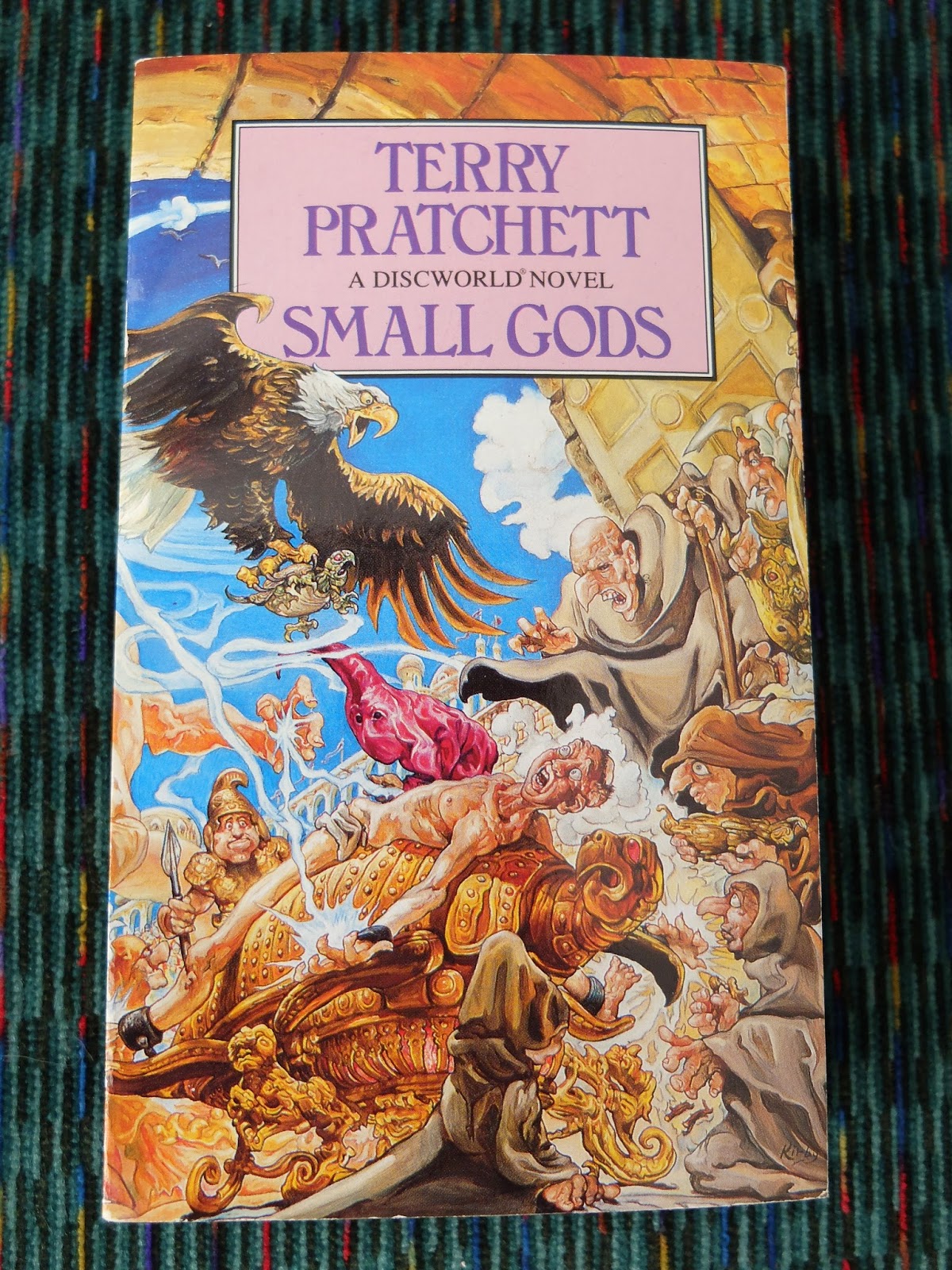 Review:
I’m not sure I ever would’ve encountered Terry Pratchett’s work if not for a friend I had in grade seven who lent me the first few of his books that I read. Many of them were also available in the public library, of course, but I wouldn’t’ve thought of checking them out. As it was, I began with Good Omens and then moved into the Discworld, a comedic/fantastic world which is a flat disc resting on the backs of four elephants standing on the shell of a turtle swimming through space. Originally the series lampooned fantasy tropes, but as the years have gone by, it's evolved into something smarter and more satirical. Anyway, so much time has passed that I can’t remember which Discworld book I read first. Suffice it to say that I’ve read many more since.

Sir Terry Pratchett died March 12 this year, and it was the saddest “celebrity death” that I’ve experienced so far, in a year seemingly full of them. I’ve never been able to understand the outpourings of grief before, but I get it now. No other writer’s work has been with me for such a long time, with the possible exception of Charlotte Brontë’s, but she died well over a hundred years before I was even born, and with her it’s really just the one book that I keep rereading at various points in my life. Pratchett’s work is different. Since I started reading his books, I’ve always known that I could pick up any one of them, anytime, read it and like it. Or love it. The only other writer who even comes close to that is Stephen King, but I didn’t start on his books until well into my teens, and I’m a little more skeptical of the quality of his body of work, his writing tics and politics. My love for Pratchett is uncomplicated and unique, anyway, and I’m sad that he’s gone.

I’d been planning a reread of Small Gods for a long time, and this was the time to do it. I tend to recommend this book to Discworld beginners, although, upon further consideration, it’s a bit atypical in the series, so I may have to revise that. The trouble is that people end up having their own preferences within the series (I like the Witches and the “Industrial Revolution”) so it’s hard to know what to recommend. I do still think that Small Gods is one of the best of the Discworld books I’ve read, in terms of its ideas if not its humour.

Small Gods is the story of Brutha, a novice in the Omnian Church, and the last true believer of the Great God Om, who is less a Great God and more of a tortoise at the moment. Brutha gets recruited by Vorbis, the head of the Quisition, to go with what amounts to a war mission to Ephebe (somewhat analogous to Greece) because of his amazing memory. There isn’t really a whole lot to the plot, honestly, although I’ve left pretty much everything out.

I’ve talked a little bit about my own “faith journey” of sorts here before (and am hoping to find some time to review Shusaku Endo’s Silence in the near future, where I may finally elaborate), and I think the reason I like this book so much is because of the ways it explores ideas of religion: how gods just want people to believe in them, and how people want so much more from gods, and how a religion is built up and shaped or distorted by the different people in the upper echelons, and on and on. These are things that I often find myself thinking about despite the fact that I haven’t been to church for anything other than a funeral in something like two years at least.

I don’t think everyone out there is going to love the Discworld series, honestly. If you aren’t into comedy or fantasy you probably won’t care for it much. Pratchett’s effortlessly funny, though, and keenly observant. If you need Tolkien-style worldbuilding, you may not want to pick up the Discworld books, either. If you want really deep character studies or explicit sex, you won’t find it here. The Discworld books, though, are entertaining, snappy, and much deeper than they seem. I never met Terry Pratchett, but I’m glad that his books have been a part of my life for so long. If you’re curious after reading this, I encourage you to make them a part of yours, too.

Humans! They lived in a world where the grass continued to be green and the sun rose every day and flowers regularly turned into fruit, and what impressed them? Weeping statues. And wine made out of water! A mere quantum-mechanistic tunnel effect, that'd happen anyway if you were prepared to wait zillions of years. As if the turning of sunlight into wine, by means of vines and grapes and time and enzymes, wasn't a thousand times more impressive and happened all the time...

He says gods like to see an atheist around. Gives them something to aim at.