My apologies about the lack of a post last week, everyone. This week you'll get two if I remember to do the Current Distractions post on Saturday, and I'm actually starting to feel like I might want to pick up a novel again soon (I read this one before That Which Will Not Be Named), so there's that. -M.R. 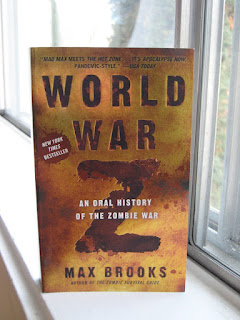 Review:
I have to begin by saying that I really don't get it when it comes to zombies. I thought Night of the Living Dead was alright, and 28 Days Later was scary (but doesn't seem like a straightforward zombie movie to me in the first place). I loved Fido (a Canadian film!, which I didn't realize at time of watching), and I need to give Shaun of the Dead a rewatch. But besides The White Zombie and the Resident Evil movies, those are literally the only zombie-related things that I've seen. I just don't find traditional zombies all that scary or interesting, although I can kind of appreciate why other people do.

So I'm not exactly the ideal audience for World War Z by Max Brooks. I'd heard really good things about the book from people whose taste I tend to trust, though, and so I really wanted to give it a try.

To my dismay, but also unsurprisingly, I thought the book was just ok.

The book is subtitled "An Oral History of the Zombie War." It's a compilation of interviews with various survivors of a near-future zombie apocalypse. The outbreak of the mysterious zombie virus-thing begins in China and spreads rapidly all over the globe. I won't get into what each country ends up doing in response to this (the scariest aspects of the book come from the necessary-but-abhorrent measures that are resorted to in order to "win" the Zombie War), and there aren't really any main characters or story arcs, but basically the interviews come from people all over the world: soldiers, human traffickers, doctors, government officials, and a handful of just normal people.

My biggest issue with the book was just my personal indifference to the subject matter. The first part of The Stand gave me nightmares, but I read World War Z with a sort of cold detachment. I do have some other, content-based objections to it, though. For one thing, my edition was plagued (GET IT!?) with typographical errors, some of which looked suspiciously like straight up editing errors.

Max Brooks is a good writer, but not a great one, and his international cast suffers because of it. I've mentioned the subtle foreign language cues in The Old Wives' Tale, Lord Jim, and Kim previously, and World War Z is completely devoid of these, to its detriment. Brooks' characters all speak (or are "translated") as native English speakers, and this reduces the feel of the scope of the novel considerably. Brooks just doesn't have the skill to give each character a unique and distinct voice. (To which I'd like to add that I think something like this would be much easier to do as a multi-author project, à la compilations like War of the Worlds: Global Dispatches and Machine of Death [which itself suffers from a lack of cohesiveness due to {parentheses!} a not-well-enough-defined premise].)

The scope of the book also doesn't overcome the writer's American bias, and I don't mean this in a "boo hoo, but what about the Canadians?!" sort of way. Brooks has many non-American settings, but probably half of them are occupied by American exiles of various stripes. And I can't think of a single female authority figure who was interviewed, which was disappointing. Even the civilian interviews are heavily skewed toward the male perspective. These aren't enormous problems, but in a novel that purports to be excerpted from an enormous and comprehensive body of content, stuff like this does nothing to support the realistic tone that Brooks was obviously going for.

Anyway, I'm talking about this like it was the worst reading experience of my life or something. It certainly wasn't that, it's just that the book has a few really obvious problems. It's fun and engaging, though, with a good amount of variety in the subject matter of the stories it tells, if not the voices of the people telling them. If you like zombies, you'll probably love it.