As promised at some point in the past, here is the first board member bio type thing. This will by no means be a comprehensive summary of any of these people's lives, although I will focus on a few broad descriptors so that I can summarize them at the end of all this. 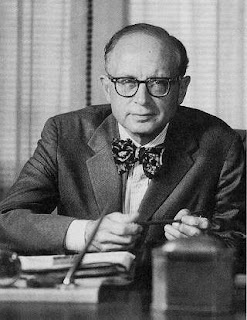 Literary Awards: Pulitzer Prize for The Americans: The Democratic Experience

Life:
Daniel J. Boorstin's life begins with a very interesting story, involving his lawyer father's participation in the defense of a Jewish man accused of murdering a young girl in Georgia. From there things get a bit less exciting, though.

Boorstin grew up in Oklahoma after his family basically fled Georgia, and went to school at Harvard, Oxford (as a Rhodes scholar), and finally Yale Law School, i.e. he was a lawyer by training. He was a professor at the University of Chicago for 25 years and the US Congress librarian, despite not being an actual librarian, for 12 years.

He wrote over 20 books, many of which seem to have very rah rah American subject matter, although some of the others, dealing with celebrity, world history, and the influence of technology on history, look like they might be interesting. After all, a bunch of them were apparently bestsellers.

Besides being a patriot, Boorstin flirted with was a member of the US communist party in the 1930s--probably during his early twenties, in other words. He then abruptly became a conservative. It's unclear whether he was racist or just insistently colour blind.

He and his wife/editor, Ruth, had three children.