Year Published: 1949
Pages: 318
First Sentence: It was Charles who called us the parasites. 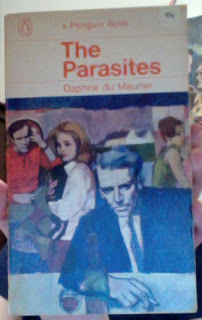 Review:
I'm really not sure where to begin with this one, so we'll have to go straight in to the summary. Maria, Niall, and Celia Delaney are three semi-siblings. Maria is the daughter of their "Pappy" by some mysterious woman, Niall is the son of their "Mama" by some mysterious man, and Celia is the daughter of Pappy and Mama. Pappy is a famous singer and Mama a famous dancer, and the Delaneys' famous parents cart them around early 20th century Europe and basically neglect them.

After Mama dies in a tragic accident, Maria goes to a theatre company in Liverpool, Niall goes to boarding school, and Celia continues touring with Pappy. But it seems to be during this time that their roles become cemented: Niall and Maria develop a confusingly intimate relationship, and Celia becomes her Pappy's caretaker as a way of avoiding her own life.

Maria and Niall aren't very likeable characters and although I found Celia a bit better, she's clearly just sort of a doormat. Furthermore, I found the relationship between Maria and Niall to be really creepy. These are two people who were raised together but apparently (?) become physically intimate at some point. I'm pretty sure there's something in attachment theory that says that that shouldn't happen. (It isn't on the scale of Francesca Lia Block's Wasteland, or anything, considering that Maria and Niall are aware that they're stepsiblings throughout their lives, but still, ugh. Wasteland was oddly less creepy, in some ways.) Of course, this has everything to do with their characterization as parasitic, but it wasn't fun to read.

The book wasn't all bad or anything by any means. There are quite a few good secondary characters, and the scenes between them and the Delaneys can be quite good. Pappy is great, and so is Niall's sugar mama, Freada. But this definitely isn't a must-read, and I'd recommend Rebecca long before The Parasites.

(Fun but irrelevant fact: I inherited all three of the Daphne du Maurier books I've read and one other one, which will probably show up in a post soon, through my great aunt who died a couple of years ago. I'm not sure about the others, but this book must've actually first belonged to my great grandma, since her name is written on the first page.)

Quotations:
The tragedy of life, though Niall, brushing his hair with the ebony brush and too few bristles that Pappy had given him on his twenty-first birthday, was not that people died; but that they died to you. All people died to Niall, except Maria. Therefore Charles was right. I live and feed upon Maria, thought Niall, in her I have my being, I lie embedded deep in the guts of her, and I can't escape because I don't want to escape, ever... ever...
Posted by M.R. at 12/26/2011 09:38:00 PM