17. The Heart Is a Lonely Hunter by Carson McCullers 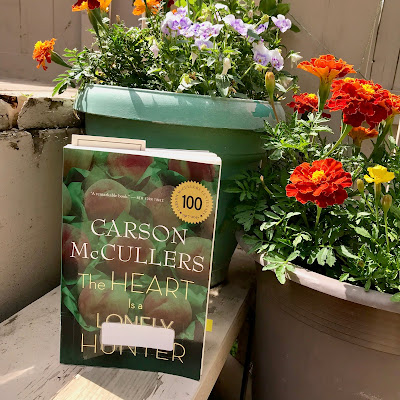 Review:
Read The Heart Is a Lonely Hunter if you want to have your heart broken. The title is so apt, the observations so careful, and most amazing of all is that Carson McCullers wrote it when she was only 23 years old. At that age I was still a complete idiot, not writing the cold truths of the human experience. (You should know if you were reading this blog at the beginning.)

The book is about John Singer, who is deaf and non-verbal ("mute" is the word used in the book), living in a small mill town in the American South in the 1930s. He has one constant companion, Spiros Antonapoulos, also deaf and non-verbal. The two of them live together happily until Antonapoulos suffers a serious medical attack of some kind, and a relative sends him to an asylum. This leaves John Singer alone in town with no one capable of communicating with him, except via pen and paper. He takes a room in the Kelly family boarding house, and arranges to have all his meals at a restaurant in town.

Soon, he attracts what I can only refer to as a group of devotees. Principally there's Mick Kelly, a tween girl who is fascinated by Singer and also completely enthralled by music that her circumstances make it impossible for her to possess. There's also Doctor Benedict Mady Copeland, the town's black doctor, frustrated activist and suffering from tuberculosis. Jake Blount is a young vagrant type who drinks way way way too much, and Biff Brannon owns the restaurant where Singer gets his meals. All of these people project different things onto Singer and spend time talking to him (along with his pen and paper, he can read lips). Because he can't really speak to them, they all simply project themselves onto him.

The plot of this book is not important, though, it's all about the interactions between these characters and the thoughts inside their heads. The way McCullers illustrates Mick Kelly's love of music, for example, is stunning. Listening to Beethoven's Eroica on the radio from outside the home of some wealthy family, this is how Mick experiences it:

How did it come? For a minute the opening balanced from one side to the other. Like a walk or march. Like God strutting in the night. The outside of her was suddenly froze and only that first part of the music was hot inside her heart. She could not even hear what sounded after, but she sat there waiting and froze, wither her fists tight. And after a while the music came again, harder and loud. It didn't have anything to do with God. This was her, Mick Kelly, walking in the daytime and by herself at night. This music was her—the real plain her.
She could not listen good enough to hear it all.

It would be easy to fault Singer's devotees for the way they all basically unload their woes onto him without considering his own humanity. I do fault them. But the crushing thing is that he does it himself. He projects so much onto Antonapoulos that he becomes completely lost without his companion, unable to even connect with other deaf people when he encounters them.

This book is almost entirely about how desperate we all are for a listener, whether that listener can hear us or not. As long as we think they're listening, we don't feel so alone.

The end of the book is open for most of the characters, and I didn't feel that optimistic about any of them. This is a book with a lot of truth in it but not much hope.

He nodded yes again and wrote on his pad with his silver pencil. Once he had traveled to Ontario, Canada—across the river from Detroit. Canada was so far up north that the white snow drifted up to the roofs of the houses. That was where the Quints were and the St. Lawrence River. The people ran up and down the streets speaking French to each other. And far up in the north there were deep forests and white ice igloos. The arctic region with the beautiful northern lights.