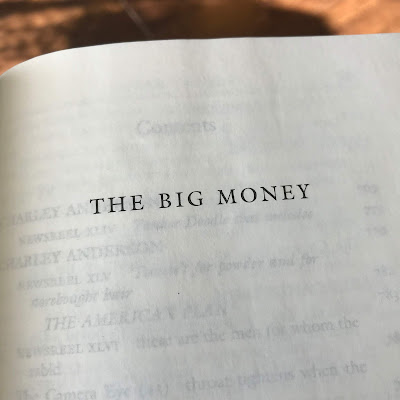 Review:
I'm going to try to avoid it, but this may end up turning into a review of the whole U.S.A. trilogy sooner rather than later.

The Big Money is the final book in John Dos Passos' trilogy, which started out strong but that I wasn't able to maintain my patience for. The book is in the same format as the previous two, with "Camera Eyes," "Newsreels," prose poem profiles, and narratives from the perspective of several characters. It is very explicitly about its title, the Big Money, and the enormous forces of capitalism in shaping post-WWI America.

The characters we follow this time are two that we've encountered before and two new ones:

The two female characters in this book were quite fun and/or interesting to spend time with. Mary's the kind of person who's so committed to her cause that she makes you feel ashamed for not having the guts and conviction to follow her lead. Margo has been chewed up and spit out by the world she lives in, and keeps rising from the ashes through a combination of determination and luck.

Having spent what felt like a lot of time already with the male characters, though, it was hard to sustain any interest in their stories. Charley Anderson ends up being a wealthy brute (though honestly his arc is pretty good when considered in a macro sense, not distributed over a hundred pages) and Dick Savage is still boring.

The biggest problem is that, having read the two prior books in the trilogy, I knew that this was all going to just drop off into mystery. It's hard to stay invested in characters that the book itself isn't that invested in. This may be realistic, but I don't find it to be great when it comes to readability, entertainment, and, dare I say, memorability.

Because that's the biggest problem with this trilogy. I spent over two straight months reading it practically every single day, and I can barely remember a single thing in it outside of the prose poem profiles of historical figures that I enjoyed so much. I'm left with a vague sense of the universality of injustice and inequality and the violence and urgency of the early labour movement and the greed and nepotism and amorality of the people at the top and maybe that's the point? But how long will that sense stay with me? We'll see.

In that respect and several others, it's hard not to compare U.S.A. to the Studs Lonigan trilogy. I read them both in nice bound editions of all three books together, with onionskin paper pages. I spent a lot of time with them both. They're set around the same time. But Studs Lonigan and U.S.A. have very different scopes, it's right there in the titles. And yet Studs Lonigan, being specific about one man in one city does a lot more to develop a sense of a place and time and world. U.S.A., in its ambition, just doesn't deliver on its title.

It's possible, of course, that I'm getting unjustly hung up on that title. Dos Passos is successful when it comes to the struggle between capital and humanity (though 1919 is a mess). He's not showing us the whole USA, though. There are no immigrant stories featured in the trilogy (Mac only semi-qualifies, others are just alluded to). There are no rural stories. There are no African American stories.

The fact is that those stories probably weren't on Dos Passos' or his readers' radar in the early to mid 1930s, whereas now we're finally clamouring to hear them. I wonder if I'd read this trilogy even five years early, if I'd've noticed the lack of those voices.

Certainly I still would've found it boring back then. I enjoyed the first book well enough, was still curious at the end of the second, and then, when the book was overdue at the library with no renewals left, and I was 120 pages from the end, I nearly abandoned the whole thing.

Nevertheless, I hope that someday some brilliant person attempts this same project for the early 21st century. They will need far more than a trilogy, and they may not be successful either, but I think it's a worthwhile enterprise.

Here I am pulling a boner the first thing, she thought.