Year Published: 1932
Pages: 413
First Sentence:
Oh the infantree the infantree
With the dirt behind their ears.
Rating: 2/3 (meh) 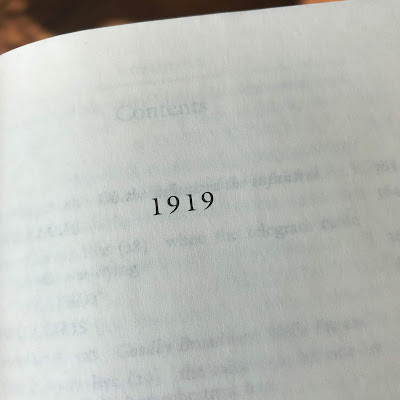 Review:
I'm a bit surprised that anyone manages to get past the second book of a trilogy at all. So often, second books are just sort of there, not as impressive as either the introduction or the conclusion. John Dos Passos' second book in the U.S.A. trilogy, 1919, suffers from this problem. It was at least good enough to keep me interested in the third book, but not much better than that.

And of course, as is typical when I review multiple books in a trilogy or series, expect some spoilers ahead.

So, 1919 has the same format as The 42nd Parallel, which is to say there are four modes/formats of storytelling: "Camera Eyes," "Newsreels," prose poem historical character profiles, and narratives about several characters. There still isn't a specific plot, more a circling of characters around the First World War. For a book about the U.S.A., a surprising majority of this one is set in France and a handful of other European locations.

The crop of characters in this book is new, though adjacent to those from the first book:

In case it's not obvious, I had a really hard time with the characters this time, which sucks because the whole novel depends on the reader's interest in these characters, even if they aren't likeable. Dick Savage's sections, in particular, felt endless. And Joe Williams' racism makes it even more noticeable that although this novel and trilogy purport to be about the whole American experience, the characters are almost exclusively WASPs.

Still, there's something special enough going on here that I want to read the final book. The second to last prose poem section, "Paul Bunyan," is a total gut punch. It's about Wesley Everest, wobbly, WWI veteran, and lynching victim. I have a feeling that this is intended to set the tone for the third and final book, The Big Money.
Posted by M.R. at 2/24/2020 12:00:00 AM