Year Published: 1919
Pages: 303
First Sentence: The writer, an old man with a white mustache, had some difficulty in getting into bed.
Rating: 1/3 (don’t bother) 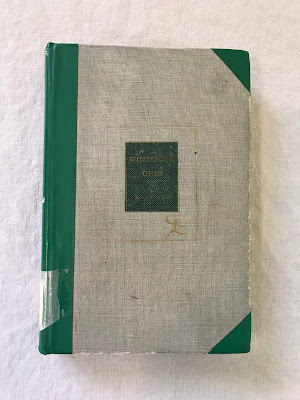 Review:
I hardly know where to begin. I suppose we should start with the fact that Winesburg, Ohio is not a novel. It's not like Finnegans Wake, which is the only other book on The List that I've made this accusation against. Winesburg, Ohio is in fact not a novel because it is a collection of short stories, aka "A Group of Tales of Ohio Small-Town Life," which is the subtitle. I don't know how to review a short story collection in the format I usually use, so strap in for a bunch of rambling.

Let's kill time with a list of the stories, I guess? I will append some thoughts that I noted as a I finished reading each of them.

So the unifying factor between all of these stories is that they're about the people in a small fictional town called Winesburg, Ohio, and also there's a young man named George Willard who tends to pop in and out of the various stories. George works for the local paper.

Before I tell you how frustrated I was by the whole operation, I will say that Sherwood Anderson has a gift for getting to the heart of things every now and then. I had to read this as an ebook because I couldn't get it from the library fast enough, and I found myself highlighting quite a few passages (some of which are copied below as usual). Generally what he gets to the heart of is hypocrisy, and how people deceive themselves. So I appreciated that.

What I didn't appreciate was the format of his stories, which often seem to begin and end at random. I did like a few better than others, but I can't really say which ones those were because thanks to the plotlessness of them all, there's not much to remember about them. In my notes above you can perhaps tell that around halfway through the book I got worn down trying to figure out what was going on in each story and just gave up. Analysis of all of these stories that I didn't enjoy reading in the first place is above my pay grade.

If you're interested in reading some pretty good character studies of random people in a small town a hundred years ago, this is a book you might enjoy. I have a hard time with short stories anyway, so I bounced right off of this. I'm amazed at how high up on The List it is. Main Street was way better.

It seemed to the boy that the man had but one object in view, to make everyone seem despicable. "I want to fill you with hatred and contempt so that you will be a superior being," he declared.

For a year she worked every day from sunrise until late at night and then after giving birth to a child she died.

Like a thousand other strong men who have come into the world here in America in these later times, Jesse was but half strong. He could master others but he could not master himself.

Her father gave her but little attention and her mother was dead. The father spent his time talking and thinking of religion. He proclaimed himself an agnostic and was so absorbed in destroying the ideas of God that had crept into the minds of his neighbors that he never saw God manifesting himself in the little child that, half forgotten, lived here and there on the bounty of her dead mother's relatives.