Year Published: 1935
Pages: 414
First Sentence: "Red, I tell you, when I saw poor Shrimp Haggerty laid out in the coffin, I got a damn snaky feeling," Stan Simonsky, riding backward by the window, morosely said, turning to Red Kelly beside him.
Rating: 2/3 (meh) 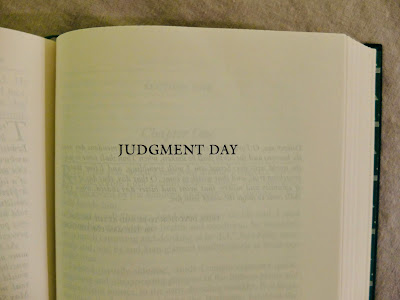 Well, here we are over 900 pages later, at the end of the Studs Lonigan trilogy. Was it worth it? This review attempts to look at Judgment Day as well as the entire trilogy.

This book has the most compressed timeline of the three. It's 1931, Studs is 29 years old. He's on a train, on his way home from yet another one of his friends' funerals. Red Kelly is still around, and Weary Reilley went to prison for the crime he committed at the end of the previous novel. Studs was laid low by a bad case of pneumonia after his adventure on NYE 1929, and it's pretty much resulted in the total wreck of his health. Whether it be his health or his increasing maturity, he seems to have settled down a bit, though. He's seeing a girl named Catherine Banahan now, and while talking with his friends on the train, he decides to propose to her.

She accepts. The relationship between Studs and Catherine is perplexing, in that most of the time he doesn't seem to feel anything for her at all. Studs is out of work for the majority of the book because his father's painting business is failing. Catherine has some sort of clerical job. His mother and sisters look down on her for no apparent reason. Studs makes an incredibly stupid investment and loses the majority of his savings. In one particularly interesting scene, Studs and Catherine spend many hours in a crowd watching a marathon dance competition that neither of them actually cares about, which was painfully familiar in the binge watching/reality tv era.

I mentioned before that I thought Studs would probably die by getting run over, because there was so much foreshadowing about that happening in the first two books. I was wrong! Or maybe the author changed his mind. In any case, here's what actually happens: Studs gets Catherine pregnant before they're married. This accelerates their timeline significantly. The two of them go to the beach one day, and Studs suffers an attack that results in him seeing a doctor who instructs him that he needs to take it easy, and that means he can't do his painting job anymore. He goes out job hunting in a downpour, and by the time he gets home, he's sick with pneumonia again. He doesn't make it through a second time.

Again this is a portrait of a particular man at a particular time. Studs seems to be much more alone than at any point in the past. Of course, it's now the Great Depression, and so things are pretty terrible all around. I did read the brief biography of James T. Farrell at the end of the edition of this trilogy that I had from the library, and he doesn't appear to have shared his characters' politics (i.e. he was a communist of some kind), which makes his achievement here even more impressive and also, even more unsettling.

So much of this novel and the other two books in the trilogy feels so relevant to the current political climate, where people are more concerned with blaming a mysterious cabal of international Jew bankers and social justice warriors for the world's problems, when powerful people and unfettered capitalism are the real villains. There are a lot of passages here that are flat out painful to read, either because of their racism, their misogyny, or their extreme pertinence to life in the early 21st century.

That pain is where the trouble comes in, though. This trilogy is long, and while I don't think you necessarily need to read all three books one after the other the way I did, if you read the whole thing in any configuration, you will end up spending a lot of time with a lot of reprehensible characters. The trilogy was probably always going to end this way, in the sense that I appreciate the whole thing, but it's not exactly a fun experience. More of an ordeal, really. The anti-capitalist, culturally critical message was clear enough to me, except that after being immersed in racial slurs and the objectification of women for over five hundred pages, I started to question my perception and had to read the author's biography to be sure of his intentions.

Could these books be dangerous? Would another reader find the characters' opinions and actions endorsing their own prejudices? I'm not sure. I do think that the fact that this trilogy is #29 on The List but no one has ever heard of it has a lot to do with how long and difficult it is. I mean, I'm saying all this stuff about how tough it is, because there were long sections I really enjoyed in spite of everything, and I found this extremely illuminating, and I still never ever want to read it again. If you miss the fact that Farrell is critiquing his characters, this would read more like a bigoted screed than a trilogy of novels about the way American society (or Irish-Catholic-American society) fails the individual.

So all of that is the reason why my rating for this third book of the trilogy is lower than the first two. These books are absolutely worth reading, but I'm not sure they're worth the pain and suffering and time that they take. We all already know society is failing the individual.

"Maybe if we get a man like Al Smith next year, and kick out Hoover who's only a tool of the Jew international bankers, we'll turn the corner. This country is too great and too rich to be going to the dogs the way it seems to be these days. And you know, I was speaking to a fellow today who seems to know what he's talking about, and that's just what he was saying. But we got to get a strong man in the White House, a man like Al Smith or Mussolini, to kick out the bankers and grafting politicians and racketeers, and that'll make America a country for Americans only. If we don't do that, we give arguments right into the hands of the Reds who want anarchy here like they got in Russia," Lonigan said, and Studs nodded.

A girl with tan raincoat and galoshes, a few inches of silk stockinged leg showing. Neat. Who was she? Had she ever been made? How did being made change a girl? And before they were made were they as curious about what it was and how did it feel as he'd been as a punk kid? Good girls from good homes, once they got started, became the hottest. Or did they? She was out of sight. Neat little girl anyway.