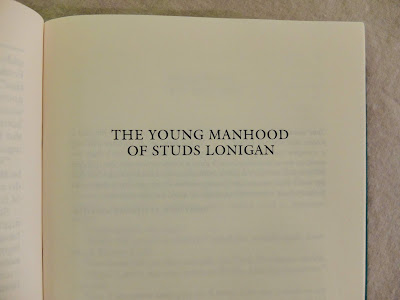 Review:
Oof. I have a bit of a hard time wholeheartedly recommending this because it is rough. But I have a feeling that it's really going to be worth it.

At the end of Young Lonigan I felt like Studs could go anywhere. He's a smart, thoughtful boy from a pretty decent home, set to continue his education, but he's also obsessed with what the tough older boys in his neighbourhood think of him. The Young Manhood of Studs Lonigan tells where he goes. It's not pleasant.

At the beginning of the book the mood is, dare I say, quite light. It's 1917 and the United States of America has finally noticed that the majority of the western world is at war and decided to join the fight. Studs Lonigan and his friends are fifteen years old and they want in on the action. Their goals are glory and girls more than anything else. They attempt to enlist by eating a huge number of bananas in order to meet the weight requirements. The army takes one look at them and laughs them out the door.

It's all downhill from there.

The book is structured such that each chapter deals with a specific episode in Studs' life, but there are large gaps in between some of these episodes. Between each chapter, there's a snippet of story that comes from another character's perspective, about things going on around Studs but not necessarily involving him. WWI ends in Chapter 2. Here are some of the other highlights: Studs attempts to rob a man. He has a terrifying encounter with a male sexual predator in a park. He starts working for his father. He and his friends drink, have sex with, and brutalize prostitutes, and generally carouse a lot. Studs goes to confession and then plays in a football game. He listens to his coworkers' complaints (they're painters and they probably all have lead poisoning, something I failed to consider until one of the characters brought it up). He sits beside a pretty woman in church on Christmas morning and fantasizes about an entire life that the two of them will share (relatable) and then continues to fantasize about her for years (less relatable). He briefly quits drinking and works out at the YMCA and attends a wake for one of his friends. He starts drinking again. He goes to a dance with Lucy Scanlan, who he's loved since elementary school, and he blows it.

There's a particularly wild chapter which is composed primarily of a sermon, reproduced in its entirety, by Father Shannon, a missionary. The sermon is about the dangers and pitfalls of the modern world/Jazz Age. I put flags on the whole thing.

"Today, there are afoot movements started by vicious men and women who philander with the souls of youth in order that they will receive their paltry profit, and their cheap, ephemeral notoriety. I refer to such movements as jazz, atheism, free-love, companionate marriage, birth-control."

Father Shannon calls out our friend Sinclair Lewis and a handful of other writers. He goes to that old "feminists are ugly old maids who want attention" well. He basically says that ideas that are contrary to the teachings of the church are dangerous and should be rejected. Studs and his friends, who are guilty of basically every sin Father Shannon rails against, make it about two hours after the mission is over before they start drinking again.

This is when things really fall apart. Studs still lives with his family and they move out of their neighbourhood, fleeing the encroaching black population in Chicago. This sets Studs adrift. At the end of the book it's New Year's Eve and he's blackout drunk and gets beat up by his old rival Weary Reilley (who himself ends the book by brutally raping a young woman).

This is still primarily a character study of Studs Lonigan, even though there are more establishing details of the world around him now. Studs is a person who has only ever wanted to be considered tough and admired by others. He's achieved both of those things, but is totally unfulfilled. When he takes women out, he has nothing to say to them. When he isn't drinking, he has no idea what to do with himself. He has no internal resources. He's uncomfortable with himself and with his thoughts. He judges any man who is outside of his circle of miscreants as being fake or unworthy.

Studs' group of friends still tends to blur together, although a few have become more distinct simply due to being mentioned more frequently. Weary is one of the most villainous. Slug is outside of the main group of Catholics. Red seems to be a leader type. Tomboy Helen who I wanted to see more of at the end of the last book appears again here briefly, and is later rumoured to be a lesbian. This is a development that I suspected would materialize pretty much as soon as she was introduced, and I find it fascinating.

The vernacular that I praised before is still here too. Most hilariously, this line from Studs' excursion to a sorority dance with Lucy:

Studs felt that everybody was looking at him, ready to laugh if he pulled a boner.

(From context, this means "make a mistake/faux pas.")

Unfortunately this also means that there are a ton of racial slurs in the book. Like. A ton. Proceed with caution on that front. Studs and his friends are horrifically racist. Here's the most terrifying example of that, from Red Kelly's perspective:

As he left, two white girls entered, laughing, with loudly-dressed buck [n-words]. The doorman told him to come again. Yes, he thought, he'd like to come with a machine gun. He took a cab to a white can house.

The word "white" in particular is often used in interesting ways, to mean "good" or "cool." It's gross.

And that really makes me wonder what James T. Farrell's deal was, exactly. Like, whose side is he on? Because to me, this reads like an indictment of toxic masculinity and hypocrisy, but is that actually what it is? (Brief aside, I was joking about the toxic masculinity thing in my previous review, but the more I read, the more confident I am that this really an exploration and condemnation of it, even if the concept wasn't named at the time.) I don't know if I trust Farrell with the content of this novel or not. The fact that I can see that sort of thing in the narrative is what's keeping me reading. It all depends on the conclusion. Can Farrell put this all together or not? (I should probably read his biography that's provided at the end of the collection for some additional context.)

So, the novel ends on New Year's Day 1929. Onward, then, to the Great Depression and Judgment Day.

A truck was coming, and on an impulse he dashed before it. Had to cut that out. Might be mashed someday, if he didn't.

(Studs being an idiot while crossing the street keeps coming up, and I have a strong feeling that this will be how things end for him. -M.R.)

His realization that death was the end terrified him. Then he was lulled, and he imaged a world when the last human had died, a world of tall grass over the gravestones of humanity, with winds sweeping the grass, through which the sunlight spread to reflect colors perceivable by no eye. Death seemed like a sensuous falling into sleep. But it was not so. It was a last slab in one's face, a final defeat, disgusting, disintegrating, insensate. His courage ebbed. Who was he to dream of doing things? What did he know? What had he accomplished?