My sister is getting married in a few weeks, and I have this empty spot to fill in my posting schedule, so I decided that there was no time like the present to finally post a list of what I think are the best books featuring sisters.

I had to scroll through a lot of books to find the few that feature sisters. To be fair, there aren't many that feature brothers, either. Authors of the genres I typically read aren't that interested in the sibling relationships, I guess. I'm very interested in those relationships, though. Your siblings are these people who know all of your secrets and that you can't ever truly kick out of your life. Most of these books are by women, with a few notable exceptions written by men.

All that being said, I really love my sister! And my brother too!

Here are the books, without further ado. They're in no particular order except the last one, which is my absolute favourite.

Although I now need to recommend this series with a big giant WARNING about the racism in it (which I don't remember from reading it in my youth, for whatever that may be worth). Eventually there are four Ingalls sisters, Mary, Laura, Carrie, and Grace (who is introduced in the fifth book of the series, which is also the book where Mary's blindness develops). The Ingalls family are pioneers into the American west and everything about their story captured my imagination as a kid. I constantly imagined what it would be like to travel with my own family by covered wagon out into the plains, and live in a tiny log cabin.

Little Women by Louisa May Alcott

If you've been reading this blog for any length of time, you'll know that Little Women is a foundational text for me. The four March sisters, Meg, Jo, Beth, and Amy, are some of my oldest friends in literature, and as I've grown up and reread the book several times, I've grown to love them all. In case you're unfamiliar, Little Women is the story of growing up in genteel poverty during and shortly after the American Civil War. The book is mostly vignettes featuring the interactions between the four sisters, the games they play, the scrapes they get into, and the lessons they learn. It's pretty Christian-oriented, but I don't think that needs to spoil anybody's fun.

This wasn't the first book that jumped to mind when I decided to write this post, but it absolutely deserves to be on the list. The Old Wives' Tale compares and contrasts the lives of two sisters, Constance and Sophia Baines, who are very different personalities, as so many sisters are. The two of them live basically right through the Victorian era, taking very different life paths. 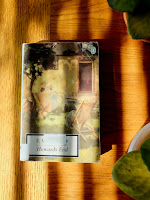 I've come to the conclusion that you can't go wrong with E. M. Forster, so it's no surprise that he can write a great relationship between sisters among so many other things. Howards End has a few plot threads, the main one being old sister Margaret Schlegel's deception by the Wilcox family. But there's also a strong bond featured between the two sisters, Margaret and Helen. Again, they are very different personalities, with Margaret being the steady support to the younger and impetuous Helen, and the affection between them is obvious.

Fall on Your Knees by Ann-Marie MacDonald

The sisters in Fall on Your Knees are Kathleen, Mercedes, Frances, and Lily, growing up in Nova Scotia in the first half of the 20th century, with an abusive father and isolated, frightened mother. The book is all about the things sisters do to protect each other and the things that they can't protect each other from.

The Thirteenth Tale by Diane Setterfield

Let's step away from the literary and classic fiction for a moment for a look at a new Gothic novel, The Thirteenth Tale, in which amateur biographer Margaret Lea, who has a missing sister, gets the opportunity to interview famous reclusive author Vida Winter. After years of lying to reporters and biographers about her past, Vida decides to tell what she claims to be her true life story to Margaret. It turns out that Vida has a sister, too.

A Head Full of Ghosts by Paul Tremblay

In A Head Full of Ghosts, Paul Tremblay explores a more sour relationship between sisters. Fourteen year old Marjorie and eight year old Merry Barrett are young girls living with their parents when Marjorie begins to exhibit the symptoms of either demonic possession or acute mental illness, eventually becoming the subject of a reality tv series. The book jumps back and forth in time, revealing the impact that Marjorie's actions have had on the life of her younger sister.

These are cheats and some of them are jokes.

My God I haven't thought about this book in years but here it is. Sometimes you just discover that you have a secret twin sister and have sex with her roommate.

The Parasites by Daphne du Maurier

This is du Maurier at her creepy interpersonal relationship best. The three Delaney siblings (two sisters and one brother) are caught up in an extremely bizarre dynamic, with Maria and Niall actually not being brother and sister, and their shared half-sister Celia being the one left to pick up the family pieces of her siblings' passions.

Ladies and gentlemen, may I present Jessica and Elizabeth Wakefield, the blonde, blue-green eyed identical twins of Sweet Valley. Stars of Sweet Valley High, Kids, Twins, Junior High, University, and God knows what else. The two girls more or less hate one another depending on which part of the series you read. It is trash.

Sisters in the Wilderness by Charlotte Gray

A dual biography of real-life pioneer sisters Susanna Moodie and Catherine Parr Traill. This book is a great illustration of how the two sisters supported one another through the trials of roughing it in the bush with an astonishing number of children and no money in the early days of Canada, mostly through letter-writing.

Although there aren't a lot of sisters in the Brontës work, I want to highlight the real-life relationship between these three sisters that produced amazing literature together.

We Band of Angels by Elizabeth M. Norman

Nurses are a sisterhood. This book is a great illustration of that, about army nurse POWs in the Philippines during WWII.

The Dune series by Frank Herbert

Can't write about sisters without mentioning the Bene Gesserit, a sisterhood of women who are basically a cross between spies, martial artists, prostitutes, and everything in between.

The Discworld series by Terry Pratchett

Specifically, the Witches. Witches are sisters.


We Have Always Lived in the Castle by Shirley Jackson

Constance and Mary Katherine Blackwood live mostly alone together in a large house. They've withdrawn and simultaneously been ostracized from the people in the nearby village following the murder of the rest of the family. The sisters have an extremely codependent relationship which evolves over the course of the novel in pretty alarming ways. To me this is the best novel about sisters not because of the warmth between the two of them (Little Women does that better) but because of how complex their relationship is, being both loving and dangerous.