R56. Fall on Your Knees by Ann-Marie MacDonald

First Sentence: They're all dead now. 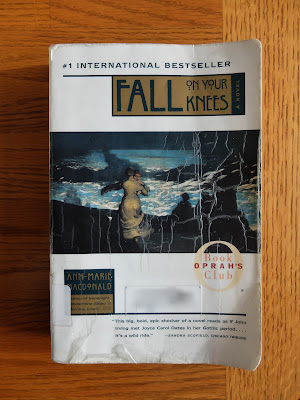 Here is everything I know about Lebanon:
This is unfortunate to say the least, given that my sister has been in a serious relationship with a Lebanese dude for years. I didn't pick up Fall on Your Knees with any intention of learning more about Lebanon. I'd heard it was a family saga set in early 20th century Cape Breton, and in my quest to read more fiction by women and more CanLit, it fit the bill perfectly. Everyone knows that all Canadians were white until the arrival of the Vietnamese boat people in the late 1970s, so of course there wouldn't be any mention of Lebanese immigrants in this book.

Five hundred pages later, I've learned at least two more things about Lebanon from Ann-Marie MacDonald:
From his introduction in the earliest pages of the novel, there is something sinister about James Piper. An only child who left his childhood home literally burning down behind him on his way to Sydney, Nova Scotia, James initially supports himself by tuning pianos. This is how he meets Materia Mahmoud, 13 year old daughter of Lebanese parents. Her father is a merchant who has built a business up from scratch after immigrating to Cape Breton. James is still young at this point, but much older than Materia. It's not long before they've eloped. When her parents discover the marriage, they disown Materia, but provide a house in the nearby town of New Waterford for her to live in with James (actually the town sort of springs up around their house, but whatever).

James and Materia have three daughters: Kathleen, who is beautiful and destined to be a famous singer, followed quite a long time later by Mercedes and Frances. Kathleen ends up having an illegitimate daughter as well, named Lily, who is raised alongside the other girls as a sister rather than a niece. Mercedes and Frances come so long after Kathleen because Materia, previously in a perpetual funk, realizes that the relationship between James and Kathleen is unhealthy, and so she does her best to distract him. There is some respite for Materia when James goes away to fight in the First World War, and then when he returns, Kathleen, a wonderful singer, is sent to New York to study under a real voice teacher. She isn't particularly closely supervised while she's there, and the first third of the novel ends with her death in childbirth after James brings her back to Cape Breton. The rest of it deals with the fallout of all of this.

Fall on Your Knees comes right up to the edge of luridness but just manages not to cross the line. It is a book all about how abuse damages everyone in its wake. It's about women who, for any reason, can't get help. There's very little information about James' past, but it's pretty clear that, if nothing else, he was beaten by his father. One wonders if there isn't another novel that could be written, with James in the role his wife and daughters are in here, i.e. as the victim rather than the abuser. (I am not particularly interested in reading that novel, however. I'm afraid that would be too lurid.)

On another note, the book isn't really about the immigrant experience or Black Nova Scotians, but it does include both of those things, and that's tremendously important. Facetious comments above aside, I know perfectly well that Canada has never been a nation of white people at any point in its history. MacDonald fails to include any indigenous perspectives in her narrative but considering everything else going on, it might have made things feel overstuffed (not to mention I have no idea how segregated that population was in Atlantic Canada during the time this story is set). There are a lot of naive, ignorant people who do think there was some mythical lily-white Past Canada where everyone spoke either English or French as soon as they got their homesteads set up. Featuring characters who contradict that in popular novels is one way to dispel that myth.

The strengths of this book are the psychology of the characters, which is opaque but evident, and the amazingly lyrical prose. MacDonald knows just when to drop in a line of prayer or song. Also I am pretty sure something happens with the verb tenses at a critical moment in the story, something I don't remember encountering before, and which blew my mind a bit. The book began in past tense, and then as I read, I noticed it had changed to present tense at some point. I flipped back and, if I'm not mistaken (and I very well may be), the tense switches just at the scene that triggers Materia's attention about James' relationship with Kathleen. This is small but powerful (and won't I feel awkward if I'm wrong about it!). There is a journal written in past tense—duh—that shows up at the end of the book and is actually the weakest part of the whole thing because I don't think the writing style in the journal entries suits the character who is writing them. Being a diarist myself, I get really critical about fictional journals.

That being said, if you are ok with portrayals of abuse, including sexual abuse, I highly recommend this book. It is poetic and perplexing and it will make you sad. That's a good thing sometimes; this is one of those times.

Mercedes and Frances understand that Arabic is something just between them and Mumma. There are many Arabic-speakers in Cape Breton by now, but the little sisters think they and their mother are the only ones, outside the mysterious population of that far-off place called the Old Country. A place better than any on earth, but a place you are nonethless lucky to have escaped,

"Because of the Turks."

The world should not be organized to require heroines, and when one is required but fails to appear we should not judge. We should just say, poor Camille, she turned into a bitch the way most people would have—and stay out of her way.

But Adelaide knows what Teresa has told her. Teresa would never dream of telling such things to her little brother. Ginger was a sweet child, and keeping him from everything unpleasant is second nature to her. Besides there are some things that are right to tell a woman friend, but otherwise indecent to repeat. Some things, when discussed with a dear husband or brother, are only poison. Good women discuss these things the way epidemiologists identify and track disease without alarming the public. This is woman's work. Men are unfitted for it by nature and should be protected from it the same way women shouldn't have to go down the mines. Men are so innocent.