First Sentence: So.
Second Sentence: In the beginning there was nothing. 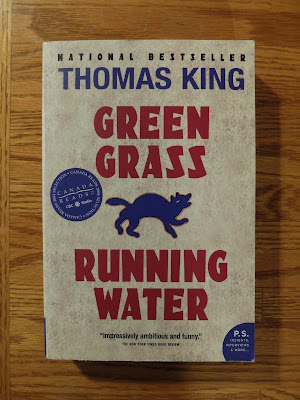 Green Grass, Running Water is yet another victim of my high expectations. The person who lent it to me along with Indian Horse recommended that I pick this up to cheer myself up after reading that book. The cover blurbs are all about how funny the book is, and so I was expecting a laugh riot. That's not exactly what I got. Thomas King's novel provoked more "knowing smile" feelings than belly laughs.

It's hard to do a synopsis of this book, even of the extremely brief variety that I usually provide, because there are many intertwining narratives. Some of them involve the twisting of Christian myths into other mythic stories, as well as literature and pop culture involving, and I'm just going to spit it out right now, Indians. There are also stories of individual people circling around a town in southern Alberta called Blossom and the reserve nearby. Lionel is turning forty and still works at an audio/visual retail outlet where he wears a gold blazer. Alberta teaches indifferent young adults at a university in Calgary, and is seeing both Lionel and Charlie, hot shot lawyer son of a Hollywood actor father, who appeared as an Indian in old westerns. She'd rather have neither of them and a baby. Latisha is Lionel's sister and she's raising three kids in the absence of her abusive idiot white husband, George. She runs a restaurant that pretends to serve dog meat. These four are the main point of view characters. The book also involves more magical realism than I was prepared for.

A brief aside because I brought up the word "Indian," but it is all over the place in this book. Nearly 25 years ago when this book was published, the accepted language was very different. "Indian" was common parlance all over the place. After circling through "native" and "aboriginal" in the intervening decades, I think we've finally settled on "indigenous" to replace "Indian," which after all means a person from India. Unfortunately the out-dated term "east Indian" still lingers (in western Canada at least) to refer to basically any non-indigenous brown person. "Indian" is generally no longer used to refer to indigenous people except in a derogatory way among white people. I do know that there are still some indigenous people who use this among themselves and far be it from me to contradict them. I do think this usage is going the way of the dodo however, and so it's interesting to see it in print in such a prominent way in this novel. It makes me wonder if the book won't eventually have a bit of a Huckleberry Finn problem (though I'm doubtful that this novel will have that kind of staying power in the literary canon).

So I really didn't find this novel very funny, and because I was expecting it to be hilarious, I'm left feeling disappointed. It is intricate and interesting, with tons of themes to unpack, but I wanted something simpler and funnier and thus the fault is in me rather than with the book itself. My one specific stylistic quibble is that King writes conversations in a way that I do not care for. His characters are frequently talking past one another, and while I do recognize that that's a real thing people do, he hits it too hard here. People really do talk to each other fairly often.