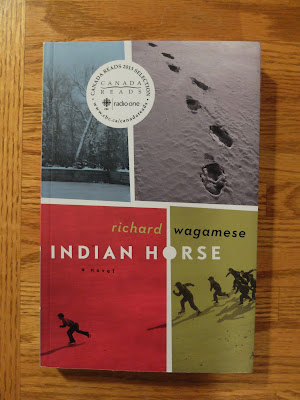 Indian Horse is a book I didn't know what to expect from, and that I can't quite figure out how to begin the review of. So I settled on that grammatically painful sentence.

It's quickly become a renowned Canadian novel, and with good reason. Richard Wagamese's book tells the kind of story that has been absent for much too long in CanLit, but that is gaining deserved prominence in the 21st century.

Saul Indian Horse is a young Ojibway man. He is living in a rehab centre at the beginning of the novel, which consists mostly of a recounting of his past. Beginning when he was a young boy living with his family, there is a constant threat that someone will apprehend him and take him away to a residential school. Sure enough, despite his parents' best efforts, Saul ends up in a residential school in Ontario. Residential schools are a national shame for Canada that we are only just starting to come to terms with, and I'd be lying if I said that Saul's story didn't bring up all kinds of weird feelings for me: not only compassion for the indigenous children suffering in the school, but some defensiveness as well.

Being smart and quiet by nature, Saul does his best to survive the school until a priest named Father Leboutilier introduces Saul and the other boys at the school to the game of hockey. Saul falls head over heels for the game, and it turns out that he's also a star player. Soon, he starts playing on a town team, only to be kicked off because the white people in the town are uncomfortable with his success. All of this is facilitated by Father Leboutilier, and given residential schools' reputation and the spectre of Graham James, I didn't have a lot of trust in him, but eventually he finds a way for Saul to leave the school and join a senior hockey team called the Manitouwadge Moose.

As you may imagine from the fact that Saul is in rehab at the beginning of the novel, things unravel, but you'll have to read the book yourself to find out why.

So, I enjoyed this book. Wagamese handles the gruesome residential school setting very adeptly, but his prose really shines when he's describing the natural world. However, I had a few issues that kept me from really loving the book.

First, I found that besides Saul, most of the characters weren't very well-developed. The family that he lives with after moving to Manitouwadge basically becomes his replacement family, but there are so few scenes between Saul and these characters that it's hard to get a handle on them. This is a minor complaint, though, because I think the reason for that is that Saul has trouble connecting with other people, so it makes sense that other characters would feel distant from him and somewhat hollow.

Next, and more importantly, is that this book is all hockey (almost) all the time, and speaking of having trouble connecting, team sports of any kind are not my thing. Not only that, but I have more and more concerns about contact sports and chronic traumatic encephalopathy (CTE), and reconciling that with Saul's/Wagamese's waxing poetic about hockey was a struggle that generally landed in favour of the CTE, unfortunately. (I should maybe also note at this point that I grew up knowing very little about hockey except how much my mom hated it.)