Lord of the Library Books

As you may or may not know, I get most of the books that I read from THE LIBRARY, aka one of my very favourite public services. I imagine that my public library has a ton of copies of The Lord of the Flies, but the one I got had a nice little treat in it. 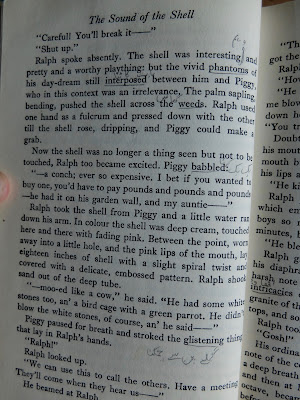 Of course I don't know why someone was writing in Arabic script in this book*, but given that it started out pretty frequent in the beginning and then eventually ceased altogether, I imagine that an Arabic speaker picked this book up for some light reading in English and was either defeated by it, or knew English a whole lot better by the end than they did at the beginning. 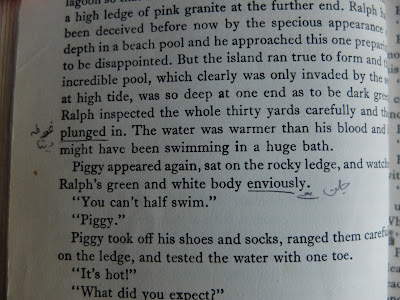 Anyway, I know I've mentioned before that I find notations in books a bit annoying as a reader because I don't like having others' impressions of a book imposed on me on first reading. This was a bit different though, and a bit more interesting. But I suppose it's obvious that being distracted by notations that are entirely incomprehensible is less disruptive to one's experience of a book's content than notations that describe someone else's opinions about a text. It's all speculation on my part that the words that have been pencilled in are translations, even. I tried putting a few of the English words into Google Translate, but I have to say that nothing really definite popped out to my uneducated eye. 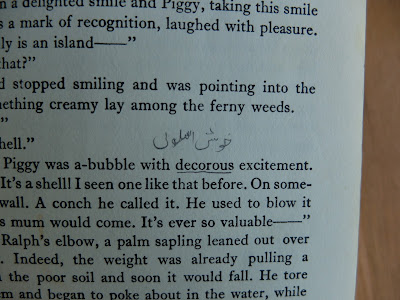 Anyway, I hope you enjoy this mild curiosity as much as I did when I opened up the book.