41. Lord of the Flies by William Golding

Year Published: 1954
Pages: 248
First Sentence: The boy with fair hair lowered himself down the last few feet of rock and began to pick his way towards the lagoon.
Rating: 3/3 (read it!) 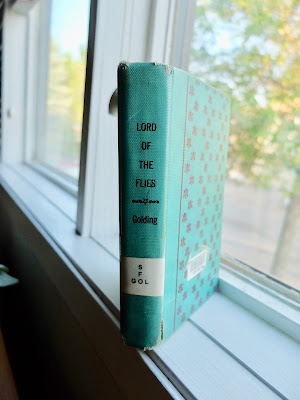 Lord of the Flies is one of those books that I feel like almost everyone on the planet has already read, or is already familiar with, but yet I never had until now.  It's another one that a lot of people read in school.  I remember that one of my cousins lent it to me during a visit (because for some strange reason I hadn't brought any books of my own?!) and so that cover with the bleeding pig face has been one I've known for a long time.

Because practically everyone has read Lord of the Flies, it's a book that has seeped into the culture. It's shorthand for a survival situation or a society going bad, for descent into savagery.  Despite never having read the book, I knew that a child dies in it because other children kill him.  Yet I wasn't sure which child, so I suppose that's something, and I'll try not to spoil it for the rare others who haven't gotten around to reading this yet. However, I will reveal that this book is the origin of the phrase "sucks to your ass-mar!" which is something I never would've guessed.

The book begins on an island.  A group of boys assembles from various points along a beach.  It's not clear who the boys are (most of them don't seem to know the others) or how they got to the island or why there isn't a single adult around.  It seems to have been a plane crash, and there's a war going on.  By means of a conch shell, the boys very quickly establish that the oldest, Ralph, will be their leader. Two other boys take somewhat subordinate roles to him. Jack, leader of a choral group that has survived as an established unit, will be the chief hunter. Piggy, a chubby boy with glasses and asthma, is basically the brains of the operation. Of course, Piggy is a cruel nickname that this boy can't shed, and we never learn his real one.

The boys survive by eating fruit, and the hunters chase the pigs that live on the island. Ralph, not an exceptionally bright boy, tries to keep a signal fire lit in hopes of a rescue, but struggles to keep the other boys motivated. The relationships between the boys are fascinating and brutal. They're all quite young, and clearly not ready to deal with this situation or the conflicts that develop between them, as they simultaneously suffer the physical and mental decline caused by malnutrition. In addition to the older boys, there are quite a few "littluns," boys around six years old, who no one cares about, which is alarming to say the least.

William Golding develops all the boys very well, although I did have issues keeping all the R names straight. Ralph was easy enough but then you throw in both a Roger and a Robert and things start to get hazy. Golding conveys the heat and verdancy of this setting in such a way that it's never possible to forget the conditions the boys are in. I found myself constantly wondering whether there weren't any bugs on the island, though. Of course the flies appear eventually, but other than that I'm not sure anything is ever mentioned, which seemed unlikely to me. On the other hand, perhaps that was deliberate.

I suppose that Golding is exploring the innate savagery of humankind or something, and while he's got a point, I think there's still some discussion to be had about just how much the dynamics of this particular group affect the eventual outcome. (Each group has its own dynamics, but would this story be different if the group had been all-female? Or if all of the boys were unknown to each other? Or with a few adults in the mix?) Speaking of that outcome, I had no idea how the book would end, and I ended up loving the ending.

In the unlikely event you've managed to skip this one so far, I definitely recommend it.

He sighed. Other people could stand up and speak to an assembly, apparently, without that dreadful feeling of the pressure of personality; could say what they would as though they were speaking to only one person. He stepped aside and looked back. Ralph was coming along, holding his spear over his shoulder. Diffidently, Simon allowed his pace to slacken until he was walking side by side with Ralph and looking up at him through the coarse black hair that fell now to his eyes. Ralph glanced sideways, smiled constrainedly as though he had forgotten that Simon had made a fool of himself, then looked away again at nothing. For a moment or two Simon was happy to be accepted and then he ceased to think about himself. When he bashed into a tree Ralph looked sideways impatiently and Robert sniggered. Simon reeled and a white spot on his forehead turned red and trickled. Ralph dismissed Simon and returned to his personal hell. They would reach the castle some time; and the chief would have to go forward.