CANADA150: Why I Hate Canadians by Will Ferguson

I'm weak and I had to lighten things up a little after Clearing the Plains, I must confess. So, given that I was travelling to Ottawa, I decided that there was literally no better time to flash around the title of this particular book in airports all across the country. Speaking of Canadians being nice, I suppose the fact that no one confronted me angrily when they saw me reading this book is proof of that. 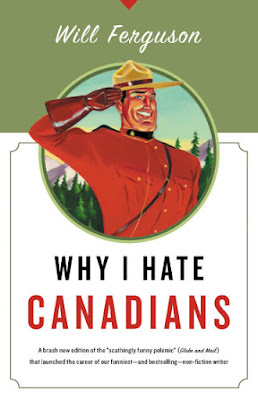 I'm not exactly sure when I first read Will Ferguson's Why I Hate Canadians or how I found it. I suspect that it was after 2001 but before 2004. Unfortunately my reading records only go back to 2008, so we'll never know. Suffice it to say that I was in high school and I was very impressionable, and this book made a big impression on me.

One thing I didn't remember is that it's actually a collection of essays that are more or less related to one another. The book is divided into five sections:


Basically, Ferguson is interested in this ever-present question of defining Canadian-ness, distinguishing it from other cultures (particularly American culture), and how often the things that we point to are not the things that really define us but somehow we really are unique.

After recommending this book for years despite having what I like to think is a more enlightened perspective than I did as a teenager in the early twenty-aughts, I was pleased to find that, twenty years after its initial publication, Why I Hate Canadians holds up well. Our national myths of niceness and rugged survivalism are still nonsense. English Canada and French Canada are still in a dysfunctional marriage that I honestly believe manages to enrich us both, although I am constantly forced to defend this position to people because everyone hates Quebecers based on third-hand accounts of their rudeness. I'm also slightly ashamed to admit that I'm still a monarchist, as compared with Will Ferguson's vehement objection to the participation of the British royals in Canada's democracy. My position is basically indefensible, and is entirely based on emotion and the legacy of the British monarchy as a sort of founding institution of Canada. Please feel free to make fun of me for this.

Certainly there are some parts of the book that are a bit dated, or where history has proceeded so that what Ferguson ends up expressing as a prediction or reflection is now somewhat inaccurate (comments regarding Russia and "political correctness," for example). I enjoyed seeing the names of various politicians that are extremely familiar to me from my years watching This Hour Has 22 Minutes and Royal Canadian Air Farce, but who are no longer present on the federal stage.

The worst/most dated essay in this book is "A Few Choice Words," which discusses the word "Indian." In this case, not referring to a person from India, but rather to an indigenous Canadian. This is an area where general opinions have moved on. You do still hear the word "Indian" bandied about, by both white people and non-white people, but it is more and more frowned upon. Mainly, it's inaccurate: using "Indian" to describe indigenous people led to the rise of the term "East Indian," at least in Western Canada, where this term often refers to any brown person at all from any South Asian country, which is also not cool. The former "Federation of Saskatchewan Indian Nations" officially changed its name to the "Federation of Sovereign Indigenous Nations" just last year, but the Saskatchewan Indian Gaming Authority, an organization created by First Nations people back in the mists of 1995, has retained its name to date, as far as I know. Contrary to Ferguson's prediction that "Indian" will remain in the Canadian vocabulary, referring to indigenous people, I think it's on its way out.

I'm afraid that I'm going to be sounding like a broken record by the time all is said and done, but this is another book that I wish more people would read. The audience Ferguson must've had in mind is primarily white English Canadians, but I think there's something in it for everyone.

Next up: Sisters in the Wilderness by Charlotte Gray (I'm not positive about this selection but it seems the most likely in light of the fact that it's handily available on my bookshelf right this minute)