Pairing: Daughter of the Fifth House, holder of the Sacred Chalice of Rixx, heir to the Holy Rings of Betazed and god-like being
First Sentence: Kerin let out a slow breath, trying to calm the slamming of his heart against his chest.
Climax: And then she was overwhelmed. 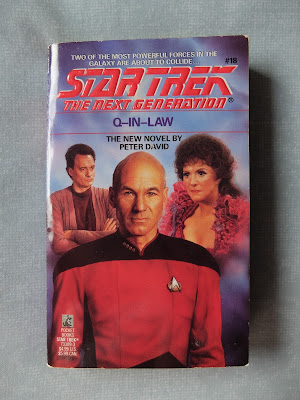 Because my posting schedule is the way it is right now, if you're reading this, it's been quite a few months since I actually read the book. I've had Q-in-Law in my possession for quite a few years, and I've been intending to make it my fiftieth Romance review pretty much since I first came across it (my Trekkie soulmate Anne bought it for me as a joke).

So it was a strange coincidence that I ended up starting to read this book on September 8, 2016, which was Star Trek's 50th birthday. Stranger still is the fact that the book was published just after the franchise's 25th anniversary, which Peter David mentions in his introduction to the novel. (Strangest of all, except for the fact that I've been immersed in Star Trek TNG and two different Trek podcasts since before Star Trek Beyond came out, is that I heard two different people reference this novel in completely separate discussions in the couple of months prior to starting to read it.)

Reading this was a strange but good way for me to celebrate the franchise I've loved for pretty much my entire life. A quick search reveals that I talk about Star Trek pretty frequently in Current Distractions posts, but not much otherwise, so if you skip those like just about everyone else does, my Trekkiness may come as a bit of a surprise as we proceed with this review. Suffice it to say for now that I love Star Trek like nothing else in fiction.

This was my first time reading one of the novels, besides a super short very middle grade Starfleet Academy book that I came across through mysterious circumstances. I've read Peter David before once, in his terrific and odd fantasy parody Sir Apropos of Nothing.

I'm going to assume a working knowledge of Star Trek TNG as I begin my summary, because otherwise we'll be here forever. The Enterprise is called on to host the week-long wedding celebrations for two teenage members of the Tizarin alien race (Kerin and Sehra). The Tizarin are noted as being basically space gypsies who have no home planet (ahaha..) and an honest version of the Ferenghi, and the two young people are members of the two most powerful families. This makes everyone on board reflect on their terrible love lives, including some Shakespearizing by Captain Picard. Because the Tizarin are traders, they invite dignitaries from a whole bunch of different planets to attend the wedding festivities. Lwaxana Troi is the representative from Betazed.

At a reception in Ten Forward, attended by everyone, Q shows up and Lwaxana's interest is instantly piqued (after some of his usual shenanigans). When Q seems to take some interest in her, everyone gets very worried. Deanna tries repeatedly to dissuade her mother from pursuing a relationship with Q, and Picard does as well. Lwaxana is confident that she's powerful enough to be a match for Q, however, and they spend some time together.

Meanwhile, Q has been meeting separately with the young couple and sowing discord. He shows Kerin what Sehra will look like when she gets old, and tells Sehra that Kerin is thinking about other women. Because they're both sixteen years old or so, this stuff is news to them, and leads to fights (by the way, for some reason no one really mentions the fact that they are super young to be getting married; I don't think they even call out a specific Tizarin custom or life expectancy or anything). Matters get so bad that, a day before the ceremony, the wedding is called off and the two families end up in open hostilities. Lwaxana is distraught by this, and Q tells her that there's something she could do about it.

Just as everyone is about to start firing at one another (the Enterprise circles the two Tizarin ships, unable to interfere because of the Prime Directive), all of the combatants are suddenly moved from their positions in space back to their respective ships. Lwaxana arrives and reveals that she has the power of the Q. The leaders of the two Tizarin families, the two spouses-to-be, Lwaxana, and some of the Enterprise crew meet to discuss the recent events. Q shows himself at this point and the two teens realize that he was manipulating them. They decide they want to get married after all. At this point, Q also tells Lwaxana that he was just playing her the whole time. He calls her some pretty shocking names.

Lwaxana is furious. With her Q powers, she pretty much kicks Q all over the ship, nearly "killing" him (I'm not convinced she would've been able to) except that Deanna and Picard talk her down from doing so. Things reset the way they always do at the end of a Star Trek episode. It turns out that a second Q was helping Lwaxana to beat up Q, and he arrives to take back the power. Kerin and Sehra get married.

Some subplot stuff I didn't mention: Riker gets emo about things between him and Deanna, and proposes to her; she laughs it off; Sehra sends Wesley her klutzy servant to be his sex slave; it's super weird; Picard and Dr. Crusher go to a dance together; Worf, Data, and Geordi are mostly just supporting characters here; Guinan is in this.

I will say that everyone was wonderfully in character, and I appreciated that a lot. Everyone from the TNG ensemble gets at least a moment or two in the novel and I had no trouble picturing them taking the actions that they take here. There are even a few good Wesley moments. That being said, I'd hoped that the book would be funnier, and I'm not positive if that's down to the writing or the fact that I'd rather have seen this on a screen. There are some pretty dated discussions of love, sex, gender roles, marriage, and on and on in here, too. I'm so used to the episodic tv structure that the pacing of the novel feels all out of whack. It takes way too much time for Q to show up, for example. A lot of the pleading with Lwaxana to stay away from him would've (and could've) been trimmed down, because it gets repetitive.

So I'm not about to start reading Star Trek novels. As interesting as some of them sound, I'm too much of a purist when it comes to THE CANON. While "but this didn't happen" makes no sense because none of it did, it's a hurdle I can't get over. Here's hoping that the new Discovery series (several months away at time of writing, should have been several months past premiering at time of posting but actually still several months away) can scratch my Star Trek itch.

"He doesn't know how to become romantically involved!" Deanna tried to explain. "He's not human!"
"Really? Then I would be his first. That's unusual to find at my age."

"Picard," said Q, with a bit of the old arrogance. "Get some hair. Your brain has caught cold."