R48. Something Borrowed by Emily Giffin

Pairing: Lawyer and lawyer
First Sentence: I was in the fifth grade the first time I thought about turning thirty.
Climax: And then, somehow, I am having sex with my best friend's fiancé. 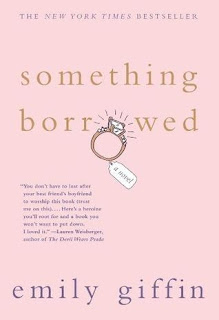 It's been a long time since I got a chance to post a good rant on the blog, and I think that since I've been concentrating so hard on getting caught up lately, this is just what I've needed. I spotted Emily Giffin's Something Borrowed when I went to pick up holds at the library the other day, and I knew that it was finally time to read it.

I first heard of this book when the movie was being released five years ago. A former coworker I really respect mentioned how good the book was. Obviously I don't really respect her taste in books, because upon seeing the trailer, I instantly knew that I would need to read the book for this blog, and that I would hate it*.

Here's what happens in the book. If I were still doing one-line plot summaries I'd describe it this way: it's ok to have sex with your best friend's fiancé as long as she's a total bitch. I suspect the average reader will have multiple issues with that.

The main character, Rachel, is feeling very sorry for herself on the evening of her thirtieth birthday. She works for a big law firm in New York and hates her job and doesn't have a boyfriend. After everyone else has gone home, she goes out for drinks with her "best friend" Darcy's fiancé, Dex, and the two of them end up falling into bed together. This happens sometime in May or June, and Darcy and Dex's wedding date is in September. Rachel is the maid of honour. What follows is that Rachel rationalizes this a bunch as being a drunken mistake that will never happen again, then proceeds to have an affair with Dex for the whole summer, while simultaneously helping Darcy with wedding plans and preparation. Rachel also manages to date two different guys, Marcus and some Englishman who she meets while visiting her friend Ethan in London. For someone whose job is supposedly terrible and all-encompassing, her social life seems pretty fucking vibrant to me.

Eventually Rachel gives Dex an ultimatum, that if they're supposedly in love, he needs to leave Darcy to be with her. At first, Dex isn't willing to do this. This is when Rachel goes to England at the drop of a hat. As soon as Rachel gets back, he meets her to let her know that he's broken off the engagement with Darcy. They're about to have sex when Darcy comes over. While Dex hides half-naked in the closet (no, really), Darcy proceeds to tell Rachel how happy she is that Dex broke off the engagement, because she's pregnant with Marcus's baby (for some reason, this allows Dex and Rachel to pretend that they were in the right). At this point, Darcy sees Dex's watch on Rachel's nightstand, and all the chips are on the table. Darcy storms out, saying she doesn't want to see either of them again. Considering that Rachel appears to have basically hated Darcy for most of the duration of their friendship, this is considered a good thing all around. Dex and Rachel live happily ever after.

Are You Kidding Me, Emily Giffin?

If there's one thing I've learned about romance novels over the course of this project, it's that they are all, also, fantasy novels. (Technically this is actually chicklit, and I apparently had that genre all wrong, because I thought chicklit was all about 30- and 40-something women finding love and fulfillment with their friends' help or whatever, not totally betraying their friends.) Morality is a secondary concern in a romance novel.

So the fact that Rachel betrays a woman who she claims to count as a friend, over and over and over again isn't necessarily a ruinous premise. When I first heard of the book, that was what shocked me most, but it has worse problems that I'm going to get into shortly.

There are a lot of gross rationalizations for the cheating happening in this novel: Darcy is terrible and selfish, she doesn't deserve Dex; Rachel knew Dex first (they're law school friends); Rachel has never felt this way about any of her previous lovers. The worst one of all comes at the end.


I scoffed out loud more than a few times while reading, but that was a major eye-roll moment. I guess Rachel feels that Darcy betrayed her by going out with Marcus, a guy that Rachel kissed a few times but barely cared about enough to interact with more than three times or so over the course of the book, all while she is having an affair with Darcy's fiancé.

Rachel Is The Worst

Rachel is The Worst. She may even be worse than Ana Steele, considering that she's thirty, not in her early twenties, and should know so much better than this.

It would be interesting if Rachel got some sort of comeuppance for how horrible she is at some point in the novel, or if someone acknowledged it, but no. Her actual friends, Hillary and Ethan (who are both cooler than she is), are rooting for her because they're her friends. None of the characters seem to notice that Rachel and Darcy are just two sides of the same coin.

I'm not sure I've encountered a more judgemental, hypocritical protagonist, who wasn't acknowledged to be so by the text (I'm thinking of a Carol Kennicott here, who thinks she's so superior to her small-town neighbours). Rachel whines about someone showing up to a party wearing the same dress she is, and then thinks of Darcy as being shallow in almost the same scene.


I scan the guests in the backyard, noticing all of the purple, hot pink, and orange dresses and skirts. It seems that every woman read the same "bright colors are in, black is out" article that I read. I followed the advice and bought a lime green sundress that is too vivid and memorable to wear again before August, which means it will cost me about one hundred and fifty dollars per wear. But I am pleased with my choice until I see the same dress, about two sizes smaller, on a slender blonde. She is much taller than I am [NB: Rachel is like 5'6"], so the dress is shorter on her, exposing an endless stretch of bronzed thigh. I make a conscious effort to stay on the opposite side of the pool from her.


At one point, Rachel and Darcy fly back to their hometown in Indiana for their old friend Annalise's baby shower. Rachel spends the party being angry about Darcy's attention seeking behaviour. She also spends a good amount of time wondering whether any of the attendees know that she makes six figures at her law firm job. This being the job she hates so much and complains about constantly with respect to her student loans.

I thought that maybe it would turn out that Darcy is secretly really insecure and the relationship between her and Rachel would be more complicated, but nope. Darcy's terrible and Rachel is worse.

And Speaking of Complicated Relationships

Here we get into the worst part of the book. Rachel and Darcy are childhood friends, who grew up in neighbouring houses in a town in Indiana. They went to elementary and high school together, then went to different universities, and both ended up in New York. They spent huge swaths of time together, and Darcy would stick up for Rachel. Darcy's one of those magnetic personalities, something Rachel resents but also basks in the glory of. They don't seem to have much in common, though.

I'm the same age as Rachel and Darcy are in this book, and almost nothing about their friendship rings true to me. I buy that these girls were friends in Indiana. I had a lot of friends growing up that I didn't really have much in common with, because I went to a small school in a small city**. The thing is, that after four plus years of university and working in different careers, I have lost touch with these people, and made friends with new ones. Considering the hostility that Rachel feels toward Darcy, I can virtually guarantee that these women wouldn't be close within one year of moving away to attend different universities.

For example, how dare Darcy talk to her best friend about something going on in her life:


Now she is laughing loudly into the phone, telling me another story about her day. She hurts my ears. The word "strident" comes to mind, and as I study my reflection again, I decide that although I'm far from beautiful, perhaps I have a softness that she lacks.


If there are adult women over the age of 25, living in cities with populations over 100,000, who have "best" friendships like the one portrayed in this book, I am sorry, and I hope that things change for them soon. It feels borderline impossible most of the time to make new friends as an adult, but you really really really don't need to hang on to people who make your life distinctly worse. This is the joy of life experience: realizing you don't have to be friends with people you hate. I, like Rachel, am currently the sad-sack single friend to everyone's marriages and babies. This is a hard thing, a lot of the time, but guess what? I still like and respect my friends.

In fact, there's just one thing that would make this book more believable, and I'm not sure how to write this without making it seem like I hate my sister, but that's just it. I'd buy this scenario 100% more readily if Darcy and Rachel were sisters.

Because I don't hate my sister at all, but the relationship between sisters is one that can go very, very wrong. A woman's sister, if they're close in age particularly, I suppose, is the easiest person for her to compare herself to. They are stuck together for life by family obligations, even if they don't particularly care for one another at all. There's some expectation that they'll be close. They can't escape one another.

Just don't. Go out for drinks with some people you like instead.

Three points that didn't fit anywhere else in the review:
* The book wasn't published during the 20th century, but I always make exceptions to that rule for romance novels.

** I have one elementary school friend remaining. We've kept in touch over the years because we care about each other and have very similar interests. Not because she sometimes says mean things to bullies on my behalf.

But I loved Ethan. I loved his unruly hair and the way his cheeks turned pink during recess and made him look like he belonged in a Renoir painting. (NB: This is from the point of view of a ten year old.)