First Sentence: He turned up one day in the doorway of my office. 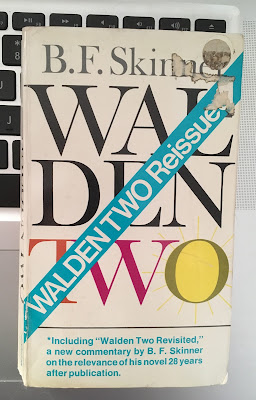 As I write this review, I'm gearing up to write a rant about the book I'm currently reading, which will be my next Romance review, and thus my heart isn't really in this one. Walden Two left me with mostly a meh feeling, and whenever that happens it's really hard to write a review.  I can say right now that it fails completely as a narrative, but I have more to add.

B. F. Skinner's novel begins with our narrator Burris, professor of psychology, being visited by a former student and one of the student's war buddies (the year in which all this is set is presumably the same year that the novel was published, given that the two veterans are young men who are understood to have fought in the Second World War).  They ask Burris if he's heard of the utopian ideas of a man called Frazier, who it turns out Burris knew in grad school.  Burris makes contact with Frazier at a place called Walden Two, and arranges to visit him there along with the two young men, Rogers and Steve Jamnik. Another professor, this time of philosophy, named Castle, and the girlfriends of the two young men, Barbara and Mary, come too.

It turns out that Walden Two is a community where Frazier has implemented his ideas of Better Living Through Behavioural Psychology with immense success. The bulk of the book just consists of him showing the group around and explaining everything about the community. There is essentially no plot or narrative conflict, which is why I say that the book fails to deliver as a narrative overall. The style is just bad.  The main speaking roles go to Burris, Castle, and Frazier, which is fair enough except that the other four characters are very seldom accounted for in these dialogue scenes between the three older men, making me feel like they were probably all just lounging around bored out of their minds.  The two young couples are basically only included in order to depict a conflict between them about whether to join up with the community, or rather to just make Barbara seem like a shallow bitch.

I don't even disagree with Skinner about that many things in the book. Many of the ideas are good.  He does seem to be making that common mistake of political thought in which human beings are reduced to frictionless spheres, or, in this case, human beings can be reduced to frictionless spheres through a program of benevolent indoctrination.  He mentions rights and uplifting women and black people but treats his female characters in a pretty gross way (Mary is sweet and salt-of-the-earth, Barbara is greedy and uncompromising and controls Rogers with her beauty) and gave the impression that Walden Two is nevertheless lily white in composition.  I don't know that it's explicitly stated that no black people live in Walden Two, but I feel like, in 1948, that was an assumption that any reader would've made.

Maybe the biggest problem is just that I don't believe in any kind of utopia. The book couldn't help reminding me of Brave New World by Aldous Huxley, and also, even more so, of Ursula K. Le Guin's The Dispossessed.  The Dispossessed is a lot better than this, but it's still a bit of a headbashing as far as world-building goes, and I was deeply skeptical of the large-scale implementation of the ideas there as well.

Don't waste your time with Walden Two if you can read The Dispossessed instead.

This had begun as an account for my benefit, but it fell away into the merest mumble. Frazier had apparently forgotten me. He finally took the glass from his eye, collapsed it, and restored it to his pocket. I shifted my position to attract his attention, and I thought I saw him start. He laughed nervously.
"Not a sparrow falleth," he said, patting the glass in his pocket. He laughed again.
We were silent as he lay back on the ground.
"It must be a great satisfaction," I said finally. "A world of your own making."
"Yes," he said. "I look upon my work and, behold, it is good."
He was lying flat on his back, his arms stretched out at full length. His legs were straight but his ankles were lightly crossed. He allowed his head to fall limply to one side, and I reflected that his beard made him look a little like Christ. Then, with a shock, I saw that he had assumed the position of crucifixion.
I was extraordinarily ill at ease. My heart was still pounding from my rapid climb, and from my fright as we reached the ledge. And, for all I knew, the man beside me might be going mad.
"Just so you don't think you're God," I said hesitantly, hoping to bring matters out into the open.
He spoke from the rather awkward position into which his head had fallen.
"There's a curious similarity," he said.
I suffered a moment of panic.