54. Light in August by William Faulkner

Year Published: 1932
Pages: 507
First Sentence: Sitting beside the road, watching the wagon mount the hill toward her, Lena thinks, 'I have come from Alabama: a fur piece.  All the way from Alabama a-walking. A fur piece.'
Rating: 2/3 (meh) 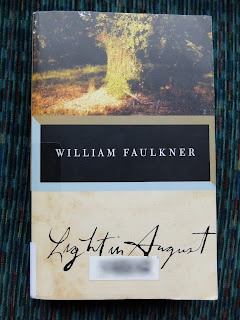 Everything about my reviewing process has failed in the face of Light in August.  About halfway through, I realized that I should've been taking copious notes throughout.  Of course I didn't and of course I didn't start then, but I'm feeling pretty determined to start doing so with future books. So while this review will probably leave out a lot of what I observed while reading this first/last of William Faulkner's List books, it hopefully won't happen again.

The back of the copy that I got from the library claimed that the book is about persistence and the three characters Lena Grove, Gail Hightower, and Joe Christmas.  This is extremely deceiving.  Certainly the book is about persistence and outsiders, but Joe Christmas is the central figure of the book to a much greater degree than Lena Grove or Gail Hightower, who just form part of the group of people surrounding Joe who never particularly care about him but are affected by him nevertheless.  They're intriguing in their own right, and there's a lot that could be said about each of them, but Lena especially is underserved by the narrative, whereas we get lots of Joe, so I'll focus on him here.

In Mississippi of the early 1930s, Joe Christmas is a man who passes as white but has something like five drops of black blood in him, and can't forget about it.  Reflecting on how much people get ridiculed for their claims of being one sixteenth Cherokee or whatever nowadays, at that point in history, being "part Negro" was very relevant.  Most of the book is about Joe's struggles with his mixed ancestry and being someone who doesn't fit into either part of the highly segregated Southern society of the time.  All of this stuff is amazing to read today, to realize both how far we've come and also why we have so far still to go.  Joe spends his first few years in an orphanage (named for the date that he was abandoned on the doorstep), goes to live with an abusive religious fanatic, and eventually runs away, spending the rest of his life seeking for belonging he knows he'll never find.

This book was nowhere near as impenetrable as I've been led to expect from Faulkner.  He does some interesting things with the text (stylistic changes in flashbacks to Joe's childhood, varying verb tenses), but it wasn't hard to follow what was going on.  Certainly the book could bear a very detailed analysis, and in this case that's something I appreciate while simultaneously feeling no urge to do anything of the kind myself.  I'm curious, though, about how Faulkner felt about the subjects he describes in this book. Knowing absolutely nothing about him and reading this book as a white person, I'm not well-situated to say whether I think Faulkner or the book was or is racist.  The discussion of exactly whose point of view is being expressed at any point in this book is one that I'm simply not equipped to have.

Another problem with my reviewing and this book, that I actually experienced to a lesser extent with On the Road as well, is that my foolproof (but not Finnegans Wake-proof) three-level rating system has broken down.  I didn't particularly enjoy On the Road or Light in August all that much, but I recognize the importance of each of them to the point that I hate to give them a "meh" rating.  I debated introducing a 2.5 "Very Important but Not Very Entertaining" rating.  I learned important things from this book, but I neither enjoyed nor disliked reading it. However, if I did that I feel like I'd have to go back and revise every single rating that I've given so far, and that would be a fool's errand at this stage of the project.

So: this book was very important but not very entertaining. If the issues I've mentioned are on your radar at all, I doubt you'll regret reading it. You just won't have much fun.

But on Sunday evening, and with the echo of the phantom hooves still crashing soundlessly in the duskfilled study, he watches quietly the puny, unhorsed figure moving with that precarious and meretricious cleverness of animals balanced on their hinder legs; that cleverness of which the man animal is so fatuously proud and which constantly betrays him by means of natural laws like gravity and ice, and by the very extraneous objects which he has himself invented, like motor cars and furniture in the dark, and the very refuse of his own eating left upon floor or pavement; and he thinks quietly how right the ancients were in making the horse an attribute and symbol of warriors and kings, when he sees the man in the street pass the low sign and turn into his gate and approach the house. He sits forward then, watching the man come up the dark walk toward the dark door; he hears the man stumble heavily at the dark bottom step.

There was nothing beaten about him. It was rather than confidence of a man who has had the controlling of lesser men and who had voluntarily and for a reason which he believed that no other man could question or comprehend, changed his life.

His voice sounded little, like a doll's voice, like even a big man's voice will sound when he is talking not against folks' listening but against their already half-made-up minds.