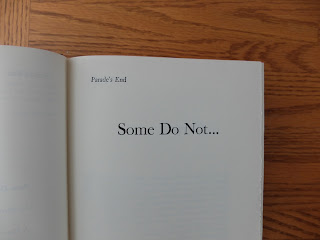 I've been looking forward to getting into Parade's End for quite a while. As I write this, I've read the first novel, Some Do Not..., and haven't started on the second, although I will tomorrow. I've been looking forward to this because somehow I found out that Parade's End is about World War I, and I feel as if I've read almost no fiction about that war. Also Ford Madox Ford is a fabulous pen name, and the use of punctuation in the titles of half of the books in this series is delicious.

Some Do Not... begins in a train on the way to somewhere or other. Christopher Tietjens (I have no idea how to say this correctly but have been reading it as "TEE-et-yens") and his friend Vincent Macmaster are heading out of town on a bit of a holiday, where they encounter various members of the government, the woman who will very quickly become Macmaster's mistress, a couple of suffragettes, and some others. Tietjens is contemplating a letter that he received from his wife, who had run off with another man, and is now asking to return. Various interactions between all of these characters last for more than the first third of the book, at which point it jumps forward to partway through World War I, with Tietjens at home with his wife Sylvia, about to go back out to the front lines. It's obvious that he has pretty severe PTSD, and that everything has changed.

I have to say, this was a challenging read. The prose is sparse and full of dialogue, plus the kinds of hints and clues that would have been obvious to readers of the 1920s but are completely opaque to me, ninety years later. I didn't hate it, but it hasn't delivered the goods yet. Mainly I found myself reading in order to find out what would happen next, but not in a particularly breathless way. The novel is structured so that it has frequent chronological leaps, only some of which are filled in by context clues and flashbacks. Except for one scene where Tietjens explains to Sylvia what happened to him on the front line, the whole thing takes place in England.

At this point in the series, I'm having a hard time forming any sort of judgement about it at all. It's dealt with romantic relationships primarily: Tietjens and his wife, Tietjens and the suffragette Valentine Wannop, Macmaster and Mrs. Duchemin (the woman who becomes his mistress), with the war forming a backdrop that's often really hard to decipher. The idea of "some do and some do not..." (hey, that's the title of the book!) is also woven through things. Some do cheat on their spouses, some do conduct their affairs or their work dishonestly, some do stay home when the country is at war—and some do not.

I don't think it's too much of a spoiler to reveal that the book ends with Tietjens heading back out to the front lines, and while I wasn't completely blown away by it, I'm at least really interested in finding out what happens next.

The brandy made no difference to his mentality, but it seemed to keep him from shivering.

"For the sake of Christ," she cried out, "as you believe that Christ died for you, try to understand that millions of men's lives are at stake...."
Mrs. Duchemin smiled.
"My poor child," she said, "if you moved in the higher circles you would look at these things with more aloofness...."
Valentine leant on the back of a high chair for support.
"You don't move in the higher circles," she said. "For Heaven's sake—for your own—remember that you are a woman, not for ever and for always a snob. You were a good woman once. You stuck to your husband for quite a long time...."
Mrs. Duchemin, in her chair, had thrown herself back.
"My good girl," she said, "have you gone mad?"