R43. The Boss by Abigail Barnette

Pairing: Fashion magazine writer and businessman
First Sentence: There are days that just feel off, and you don't know why until something momentous happens.
Climax: (I don't recall if there are any simultaneous orgasms in this book, and if there were I didn't write them down. Sensitive readers should avert their eyes. -M.R.)
When I came, I saw bursts of white behind my eyelids.
Neil wasn't far behind me, shoving hard, almost too hard, my eager cunt still spasming around him as he groaned and stilled. 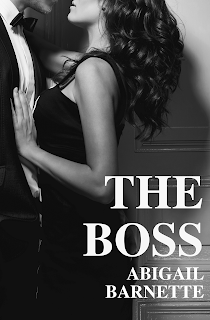 Review:
The Boss is basically fanfiction of fanfiction, and surpasses all of its source material, something I feel comfortable saying although I didn’t exactly love the book.

My memory is a bit hazy on the details right now, but here’s how this book came to be:
In the interest of full disclosure I need to reveal at this point that over the course of reading her recaps, I became a big fan of Jenny Trout.  She blogs about other stuff, too, and her writing has helped to shape my own thinking lately on things like fat shaming, body positivity, and also the romance genre.  Just know that I’m a bit biased toward her, anyway.

The Boss isn’t exactly fanfiction, despite the fact that that’s how I’ve presented it throughout this review so far.  It doesn’t have story beats that can be traced directly back to either 50SoG or Twilight, whereas anyone who’s read both of those books can very clearly identify parallels between them.  However, there are a lot of things in The Boss that read as direct refutations or reactions to 50SoG, which I’ll get into in a minute when I finally describe the plot.

Sophie Scaife is twenty four years old and works for a big fashion magazine in New York City.  The book begins when her magazine is purchased by a firm owned by her one night stand from six years before, Neil Elwood.  It turns out that the two of them have been masturbating while thinking of one another ever since, and they decide to begin a casual sexual relationship pretty much immediately.  Meanwhile, some of the other employees at the magazine are disgruntled by the changes Neil makes, and decide to do some underhanded things, which Sophie gets dragged into.  So yeah, the plot is nothing like 50SoG’s, but it sneaks in on the details.  For example, Sophie’s best friend and roommate, Holli, is a beautiful model, but she’s also Sophie’s friend, and Sophie doesn’t appear to hate her friend for no reason.  Sophie doesn’t immediately act judgey about every woman that she sees.  Neil doesn’t poopoo Sophie’s career aspirations because he’s rich.  When their relationship turns toward Dominance and submission, it doesn’t feel coercive, but is more in the safe, sane, and consensual side of the spectrum.  Sophie is never ever afraid of Neil.  Some of it, I think, is also meant as a joke, like the fact that when they first met, Sophie apparently argued with Neil about Faulkner, but doesn’t really seem to be a reader, which feels like a shout out to the ridiculous literary references in the books that “inspired” this one.

I wasn’t blown away, though.  Erotic novels will probably never be my thing. The plot is necessarily thin because Sophie and Neil are having tons of sex.  This ends up being a lot more varied and exciting and 100% better written (90% of which is just the fact that the heroine’s internal monologue never involves the words “holy cow” or “double crap” or whatever during the sex scenes) than 50SoG’s, but it was a little too graphic for my taste.  I’ve mentioned before that it’s impossible to write erotica to fit everyone’s taste, so I’m not counting that as a point against the novel.  This just really isn’t my genre.  The other major problem that I had was that I didn’t like Sophie much.  Again, this isn’t a problem with her as written, it was more of a personal reaction that I had to the character.