60. The Moviegoer by Walker Percy 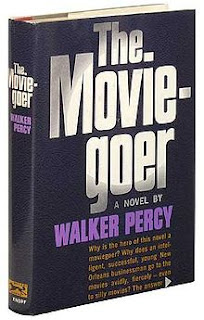 Seeing this book coming up next caused me to take another long break from The List. I attempted another one of Walker Percy's books, Love in the Ruins, a few years ago, and ended up simply giving up on that one. I like the man's titles better than his prose, I've found.

A lot of this will simply be due to taste, and yet I'm not going to urge anyone to try the work for themselves. When it comes to wounded people finding comfort in one another, The List offers several superior examples (A Room with a View comes to mind immediately, but the book I'm really thinking of is We Have Always Lived in the Castle, which of course isn't on The List at all).

Binx Bolling, Korean War veteran and stock broker (or something of that nature) is our hero. He lives in New Orleans and he seduces his secretaries. The scene is set in the days and weeks leading up to Mardi Gras, and it's the early 60s. Binx is undoubtedly suffering from some sort of PTSD. He seems to have issues with respect to his dead father as well, and his mother has remarried and had a whole raft of kids. Also, I forgot to mention that Binx is about to turn 30. I'm interested in a lot of these things but I had a terrible time connecting with Binx or anything going on in his life.

The novel's chief concern is actually Binx's relationship with Kate, his cousin-by-marriage, who suffered a tragic loss in her past, and who is still suffering badly. The novel's best parts are between the two of them.

Alas, the rest of it is such a slog that I can't recommend it. You may also note that I haven't really mentioned anything about movies, and that's because there are very few movies in the book at all. I know I've read books with more movies in them than there are in this one, although of course I can't think of any of them right now to back up that assertion. Maybe Augie March?

I've conquered Walker Percy now, though. I'll say one thing for him, which is that if there was ever a writer who could depict heat, it's him. That's something I remember more from his other book that I attempted to read. New Orleans shines here, too, although I've never been there, and wouldn't've known what a "krewe" is if not for an episode of Stuff Mom Never Told You that I listened to during the Mardi Gras season before I read the book.